Secular Stagnation: Missing the Forest for the Trees

There is a new VoxEU ebook on secular stagnation. The book is a collection of essays by many prominent economists, most of whom are proponents of secular stagnation. As readers know, I am not convinced that this problem lingers over the U.S. economy and have explained why at the Washington Post and on this blog. This latest book does nothing to ease my skepticism. Many of the authors continue to mismeasure the real interest rate and ignore what I see as important technology and demographic developments that undermine the case for secular stagnation. Let's review these key issues.

This point can illustrated by looking at the 10-year treasury yield for the United States (these graphs were first used in my Washington Post piece). The figure below shows the 10-year nominal treasury yield along with its expected inflation and term premium. The former is the annual average inflation rate expected over the next ten years, while the latter is the risk premium on treasuries that increases with the holding period of the security. The expected inflation series is constructed using data from the Survey of Professional Forecasters and the Livingston Survey.  The term premium is the average of the Kim-Wright and Adrian, Crump, and Moench estimates of the term premium. 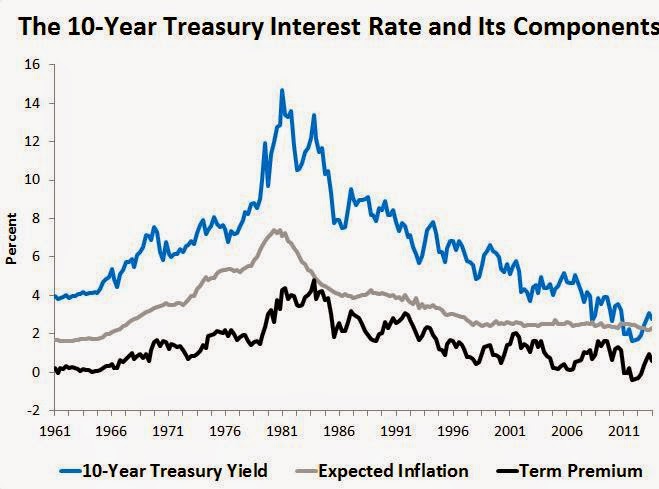 Note that both the expected inflation and the term premium begin to grow in the mid-1960s and peak in the early 1980s. From there, they both experience a secular decline. These developments track the increased uncertainty over the nominal anchor, inflation expectations, and economic policy that occurred during this time. Many stories are given for why this happened--LBJ trying to do Vietnam and the Great Society, beginning of  the Bretton Woods System breakdown, Fed using bad economic theory, etc.--but the big point is there was a big policy break from the past of relative price stability and this shock affected both the risk premium and inflation expectations.

Proponents of secular stagnation only account for the expected inflation term. They subtract it from the observed nominal treasury yield and behold a declining trend in real interest rates is found starting around early 1980, as seen below. 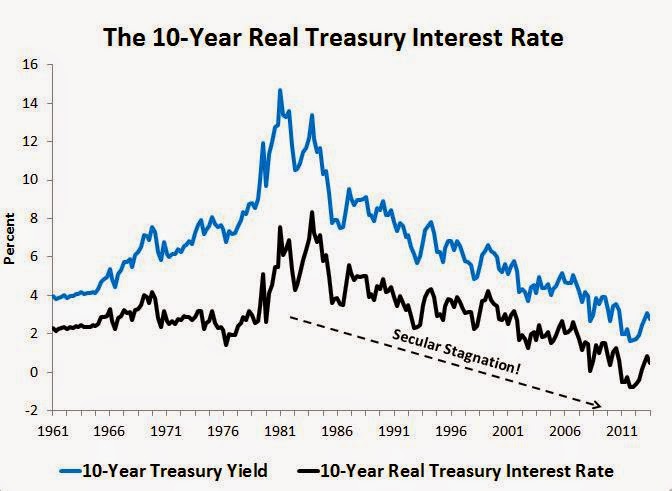 But this is not the risk-free real interest rate, the one that best approximates the natural interest rate idea. To get that, the secular stagnationists need to also subtract the estimated risk premium. This measure, shown below, shows no clear declining trend but does show a stationary-like process that revolves around a mean just about 2%. 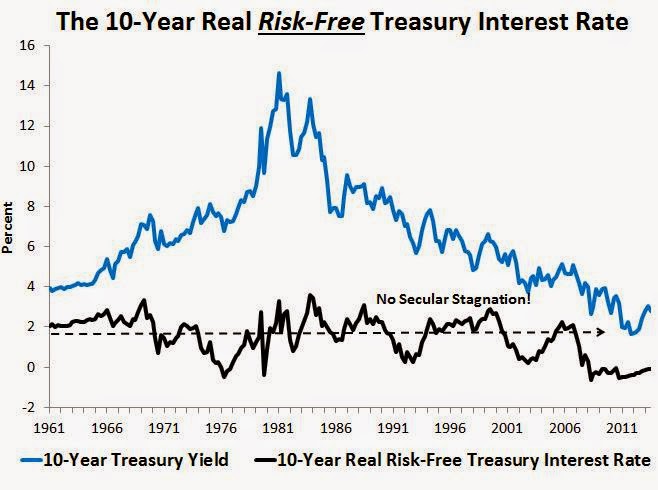 Now one could claim a new trend has set in over the last decade, but proving its a trend in this short of time is impossible. Moreover, there is a simpler answer: the deviations around the 2% mean are driven by the business cycle and we just happen to have gone through one of the worst in a long time. The figure below supports this view as it plots the CBO's output gap measure against the 10-year risk-free real interest rate: 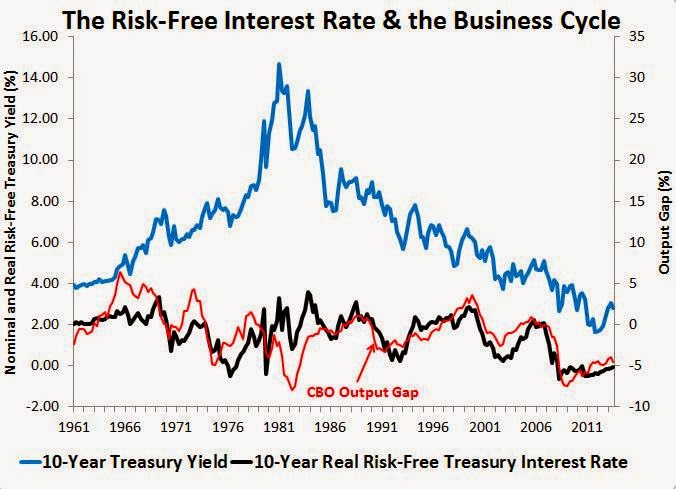 To be clear, the 10-year real risk-free rate should be equal to the average of the expected path of the short-term real risk-free rates over the same time horizon. The first few years of this interest rate path are determined by the business cycle, which explains the risk-free rate's correlation with the output gap as noted above. The remaining years are shaped by expected growth of productivity and labor force and that explain the roughly 2% trend. Proponents of secular stagnation are effectively claiming the long-term 2% trend is no more. I don't buy it because one, I think they are confusing the trend for the cycle, and two, technology and demographic developments are far better than commonly portrayed. That leads us to our next point.

Second, technology growth appears to be rapidly growing but getting harder to measure. This point has been made recently by Joel Mokyr  in the Wall Street Journal and Erik Brynjfolsson and Andrea McAfee in The Second Machine Age: Work, Progress, and Prosperity in a Time of Brilliant Technologies. Their basic point is that the economy is being radically transformed via smart machines and this will spur a period of great productivity growth, high returns to capital, and more investment. For example, imagine all the new infrastructure spending that will have to be done to support the increased use of driverless cars and trucks. Even over the past few decades there have been meaningful gains as illustrated by this hilarious spoof the show 24 being made in 1994. Noah Smith makes the case for big productivity gain even more recently. The secular stagnationists should take these developments more seriously.

Probably one reason these developments get overlooked is that they are hard to measure. As I noted in my Washington Post piece, a good example can be found in your smartphone. It contains many items you had to formerly purchase separately--books, newspapers, cameras, scanners, bank ATMs, voice recorders, radios, encyclopedias, GPS systems, maps, dictionaries, etc.--and were counted part of GDP. Now most are free and not a part of GDP. My sense is this is not a recent phenomenon, but has been going on for sometime as the economy has become more service orientated. Measuring productivity in the service sector is notoriously hard. And it is only going to get harder.

Here is a great illustration of this measurement problem. Tyler Cowen has made the case that there has been a Great Stagnation in innovation that explains the observed slowdown in productivity data. I looked at the John Fernald TFP data and found this troubling chart. It seemed to confirm the Great Stagnation theory. It showed a sharp break in trend TFP growth starting around 1973: 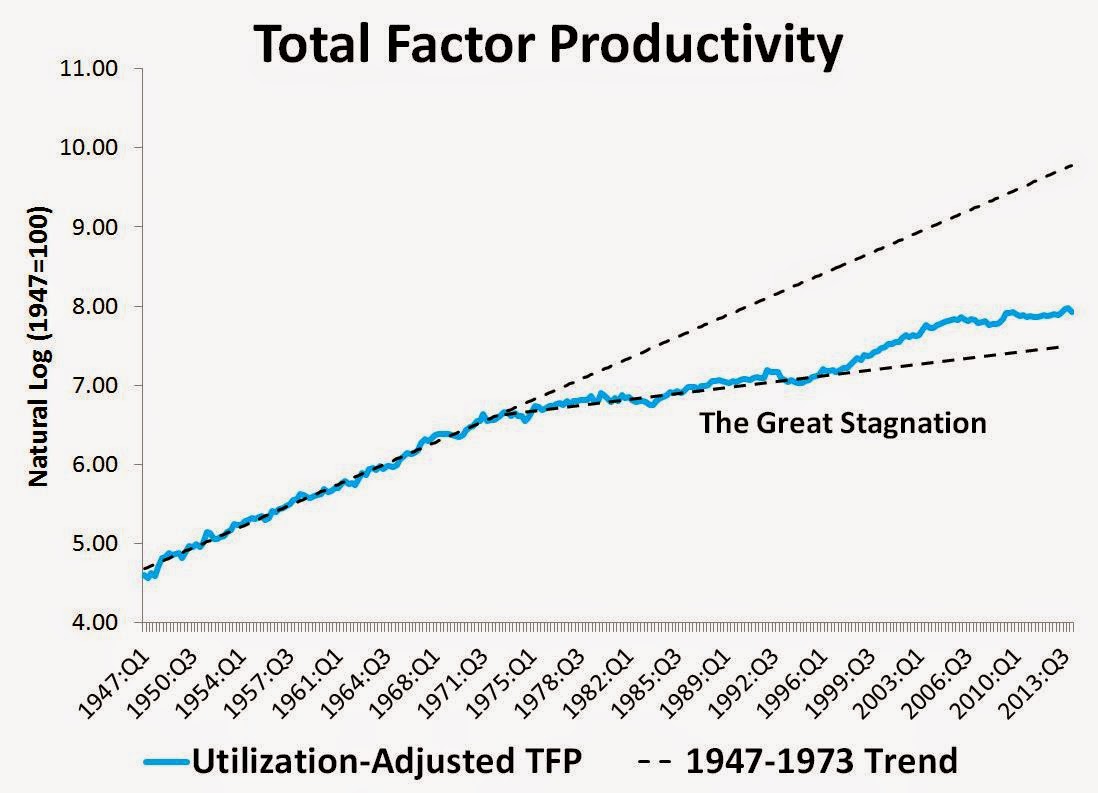 Tyler Cowen approved of the chart, but Noah Smith raised some good questions about it. He observed that the Fernald TFP data can be decomposed into TFP in investment production and TFP in consumption production. TFP in investment looks better than the overall TFP: 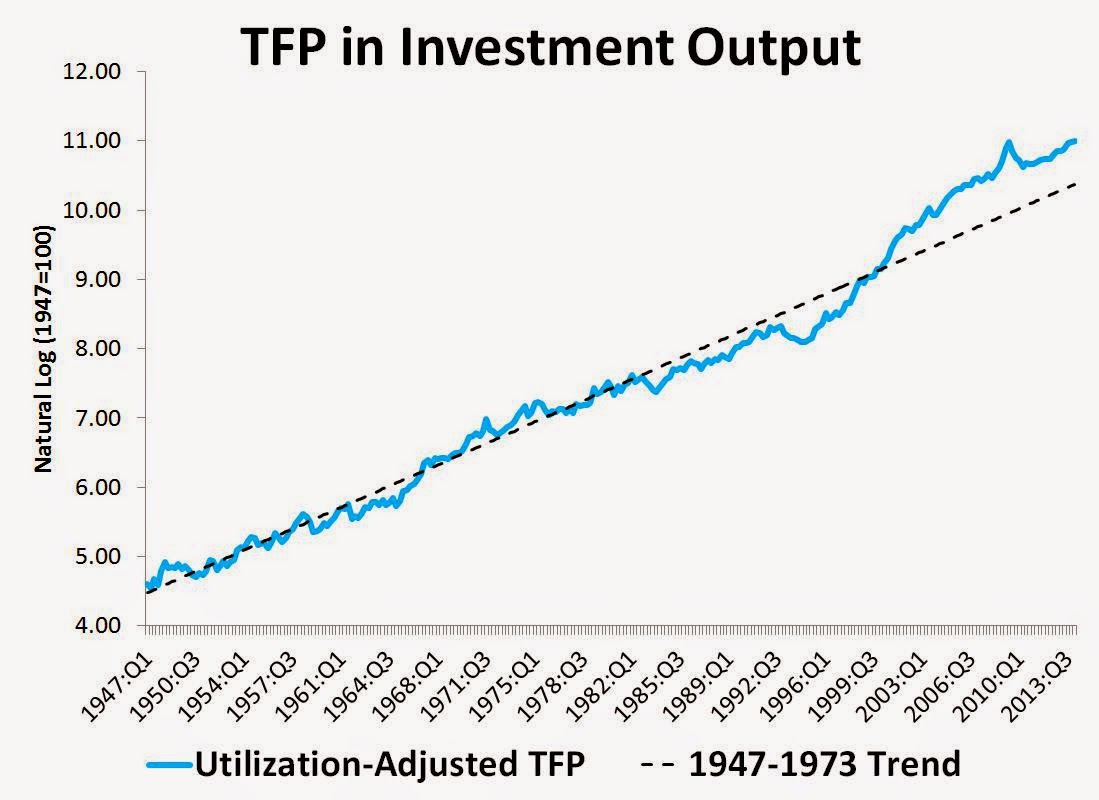 While that is interesting, what is really striking is the TFP in consumption. It has basically flatlined since the early 1970s and is what is driving the Great Stagnation. In the spirit of Tyler Cowen, let's call this segment "The Great Flattening." 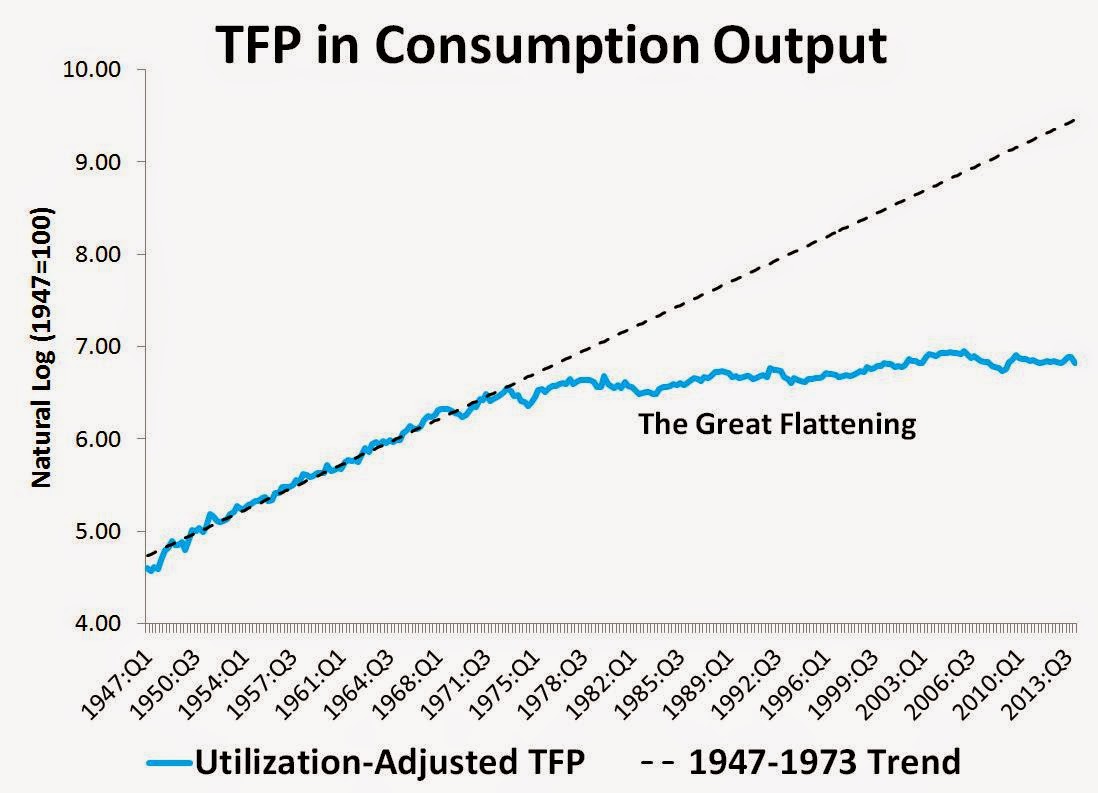 The Great Flattening does not seem reasonable. Has productivity growth in consumption really been flat since the early 1970s? No meaningful gains at all? This does not pass the smell test, yet this is one of the best TFP measures. This suggest there are big measurement problems in consumption production. And I suspect they can be traced to the service sector. I suspect if these measurement problems were fixed there would be less support for secular stagnation (and maybe for the Great Stagnation view too).

Third, the demographic outlook is not as dire as the secular stagnationists make it out to be. Bill McBride has been noting for some time that the U.S. demographic outlook is improving as the largest cohort is now found in the Millenial age group. Matt Busigin also makes this point. Globally, the United Nations also forecasts that working-age populations in many parts of the world will grow through 2050. More labor growth implies a higher return to capital and more investment demand. 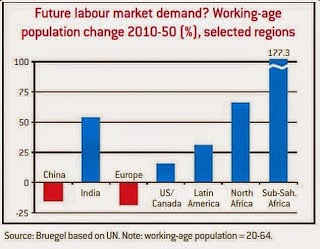 These are the reason I remain skeptical about secular stagnation and optimistic about future U.S. economic growth. Maybe the secular stagnation story makes sense for the Eurozone, but at a minimum the authors of this VoxEU book should be more cautious in their endorsement of it for the United States. My sense is that they are missing the forest for the trees. They see a five-year slump, the zero lower bound, and a gloomy outlook. From these few bad 'trees' they conclude the entire forest has succumbed to the secular stagnation disease. The evidence above suggests they are wrong. They need to start looking closer at the forest.
Posted by David Beckworth at 2:41 PM