My latest Macro Musings podcast is with Morgan Ricks. Morgan is a law professor at Vanderbilt University where he specializes in financial regulation. Between 2009 and 2010, he was a senior policy adviser at the U.S. Treasury Department where  he dealt with financial stability initiatives and capital markets policies related to the financial crisis.

Before joining the Treasury Department, Morgan was a risk-arbitrage trader at Citadel Investment Group, a Chicago-based hedge fund. He previously served as a vice president in the investment banking division of Merrill Lynch & Co., where he specialized in strategic and capital-raising transactions for financial services companies.

Morgan is also the author of a new book “The Money Problem: Rethinking Financial Regulation”. He joined me to discuss his new book and its implications for policy. His book is timely and adds some needed perspective to understanding the Great Recession. I happened to review his book for National Review and so it was a nice follow up for me to get him on the show.

A key point he makes in the book, and one that we discuss on the show, is that the standard definition of money is too narrow. Money, properly understood, should include both retail and institutional money assets. This is a point I have repeatedly  made on this blog and in various papers. Morgan, however, does a much better job articulating this point and his chapter two "Taking the Money Market Seriously" by itself make the book a great investment.

This understanding is important because it helps us better understand the financial crisis of 2007-2008. First, it helps us see that the institutional money assets were susceptible to a bank run just like retail money assets were before FDIC was introduced. The potential for a bank run with the institutional money assets came to fruition in 2007-2008. Second, this understanding also helps us see that the bank run caused a collapse in the broad money supply and that, in turn, helped bring about the sharp collapse in 2008-2009. Money still matters! It also, arguably, played a key role in anemic recovery that followed.

The collapse in the money supply can be seen in the figure below. It shows several broad measures of the money supply that include both retail and institutional money assets. The measures come from the Center for Financial Stability: 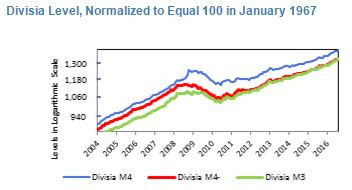 We go on to discuss his proposal for fixing the run-prone nature of the banking system, what it would mean for banking, how policy would operate, and more. Once again, another fascinating conversation throughout. And if you want further details read his book.