The IMF reports in the latest WEO that the world has a low inflation problem:

By 2015, inflation rates in more than 85 percent of a broad sample of more than 120 economies were below long-term expectations, and about 20 percent were in deflation—that is, facing a fall in the aggregate price level for goods and services (Figure 3.2). While the recent decline in inflation coincided with a sharp drop in oil and other commodity prices, core inflation—which excludes the more volatile categories of food and energy prices—has remained below central bank targets for several consecutive years in most of the major advanced economies.

Here is the IMF's figure that nicely summarizes this development: 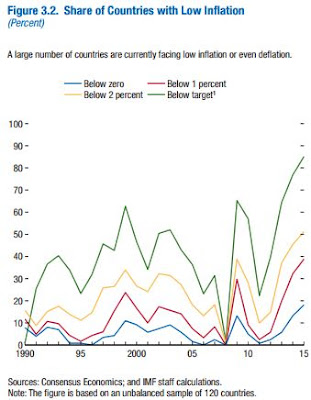 This figure shows this trend toward low inflation started around the time of the Great Recession and has only grown. Given its global nature, I am going to call this development the loflation pandemic. So what is behind it? Here is the IMF's explanation:

Economic slack and changes in commodity prices are the main drivers of lower inflation since the Great Recession.

The commodity story, in my view, is limited in how much it can explain since commodity prices have gone up and down since 2008. Moreover, as Jim Hamilton and Ben Bernanke argue, just under half of the commodity price decline since mid-2014 can be attributed to weak global demand. Weak commodity prices, in other words, are themselves partly the result of anemic demand.

The IMF does not answer these questions. All it recommends is that governments do more with fiscal and monetary policy, complemented with structural policy. This is futile. One cannot expect to change government's behavior without first knowing why they are acting as they do.

Since the IMF seems unwilling to go there, I will. Governments in advanced economies have avoided robust aggregate demand growth--and therefore have created the loflation pandemic--because of the constraints created by their past successes with inflation targeting. Inflation targeting has become the poisoned chalice of macroeconomic policy:

Put differently, no matter what the central banks try--QE, forward guidance, negative rates--they will never push beyond the public's expectation of low inflation. Fiscal policy, including helicopter drops, will also run up against this constraint.

This constraint also means that policymakers may not have the flexibility they need to stave off recessions:

Inflation targeting was a much needed nominal anchor across the globe when it was first introduced in the early 1990s. But now it has put advanced economies into a low inflation straitjacket that is becoming a drag on economic growth. Until we recognize and act upon this observation, we can expect the loflation pandemic to spread.
Posted by David Beckworth at 6:12 PM