My latest Macro Musing podcast is with Andrew Levin. Andy is a professor of economics at Dartmouth College and previously served two decades as an economist at the Federal Reserve Board, including two years as a special adviser to Chairman Ben Bernanke and Vice Chair Janet Yellen. Andy, in short, has a deep understanding of the history and workings of the Board of Governors and the FOMC .

During his time as a special adviser he helped spearhead the advent of the FOMC press conference, the Summary of Economic Projections, and the now infamous dot plot graph. He also was involved with the FOMC's official adoption of its 2 percent inflation target. Andy discusses these developments with me and how he would like to see them further refined.

We also discussed what happened in 2008. The economy was contracting and yet for much of the year the Fed was signalling it was worried about inflation and wanted to raise rates. Specifically, beginning around April 2008 the market expectation of where the federal funds rate would be 12 months ahead started rising. It rose all the way to about 3.5 percent by June 2008--the market was expecting the Fed to raise rates 150 basis points in mid-2008! Although it slowly came down, the fed fund futures rate 12-months ahead still remained higher than the actual federal funds rate through September. This can be seen in the figure below: 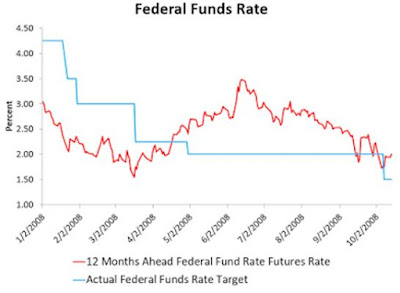 Andy notes that the FOMC transcripts reveal that even by the September 2008 meeting Fed officials were still not grasping the severity of the crisis. Why? We discuss whether they were simply too focused on inflation or whether insular thinking and group think prevented the Fed from appreciating the severity of the downturn during 2008.

We then moved on to Andy's proposed reforms. These have received coverage in the media and support from the 'Fed Up' campaign. Andy's reforms are driven by four key problems he finds with the Fed: (1) Regional Fed banks face a conflict of interest given their private ownership, (2) the process for choosing Fed officials is opaque and broken, (3) their is a lack of diversity at the Fed, (4) the Fed is shielded from public oversight. Andy's solutions to these problems are to (1) end commercial ownership of the regional Fed banks, (2) make Fed officials limited to a single, non-renewable 7-year term, (3) make all Fed employees public employees with a better representation of the American public, and (4) align transparency at the Fed with the standards of other public institutions.

We close the discussion by looking at Andy's research on the anchoring of inflation expectations, the need to do periodic evaluations of the Fed's objectives, and the question of why inflation has been persistently below target for the past five years. This was a thought-provoking conversation throughout.

Posted by David Beckworth at 9:46 AM