Lawrence J. White has an interesting article where he considers the optimal size of our financial regulatory structure. He acknowledges that the structure it is "maddenly complex" and that it "easy to make a case for drastic simplification." Larry also notes, however, that there are benefits to having some regulatory diversity. We need to recognize this tradeoff, he contends, when considering the simplification of our financial regulatory system.

To help us better understand this tradeoff, Larry lays out the case for reducing the number of financial regulators:

Regulatory decisions could be made faster, especially in a crisis, when policymakers need timely access to sensitive, proprietary information, and must coordinate actions both domestically and internationally. There would be fewer “turf wars” that can delay decisions. There would be less duplication and redundancy and less need for coordination among separate regulatory agencies... Regulatory costs would decrease, both for government (and thus for taxpayers) and for regulated firms. And there would be fewer opportunities for a race to the bottom, whereby a financial services firm tries to avoid (or reduce the burden of) regulation by “forum shopping” among regulators with parallel responsibilities who must compete for regulatees (their fee-paying clients). There also would be fewer incentives for one regulator to impede competition from financial firms under a different regulator.

He then discusses the costs to streamlining the number of financial regulators:

But there are also potential downsides. To see this, let’s really go to the limit:  Suppose that there were only a single regulator for all of the financial system. And suppose someone has a new idea for the kinds of financial services that could be made available, or for how certain services can be more effectively delivered to users.

With a single regulator, there is an obvious risk: If that regulator has the authority to reject the idea and does so before it is implemented, the game is over. There is no place else for the innovator to turn (except, perhaps, to regulators in another country).  But with multiple regulators, there is an increased chance that—if the idea is worthwhile—one or more of the regulators will see the merit in the idea.

In essence, an important assumption that underlies the potential benefits to simplification is that regulators will “get it right”: that they won’t make mistakes. By contrast, the argument for multiple regulators is an argument for diversity: that in a world where mistakes can be made, having some diversity can reduce the costs of error and increase the likelihood that worthwhile ideas will be able to take root.

This is good economic analysis. It recognizes the tradeoff to simplifying the U.S. financial regulatory structure. Mark Calabria, Norbert Michel, and Hester Pierce similarly note this tradeoff in their call to reform U.S. financial regulation. They see the need for reform, but also want to avoid going to a single 'super' regulator for the reasons outlined above. 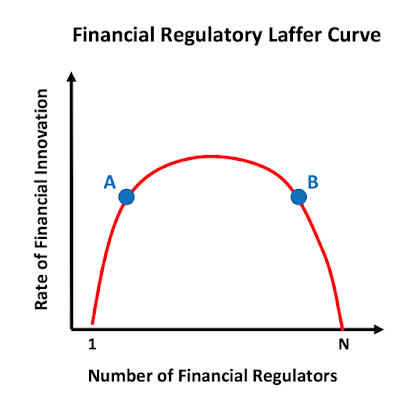 Posted by David Beckworth at 11:33 PM