I recently made the case that we got a monetary regime change in 2008 that explains the stubbornly low inflation since that time:

A monetary regime change has occurred that has lowered the growth rate and growth path of nominal demand. Since the recovery started in 2009Q3, NGDP growth has averaged 3.4 percent. This is below the 5.4 percent of 1990-2007 period (blue line in the figure below) or a 5.7 percent for the entire Great Moderation period of 1985-2007. Macroeconomic policy has dialed back the trend growth of nominal spending by 2 percentage points. That is a relatively large decline. This first development can be seen in the figure below. 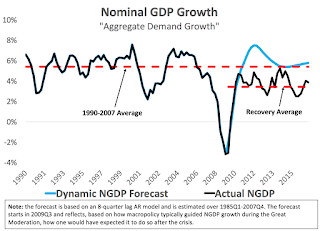 Again, these two developments are, in my view, the real story behind the drop in trend inflation. And to be clear, I think both the Fed's unwillingness to allow temporary overshooting and the safe asset shortage problem have contributed to it.

I went on to say this is the monetary regime change no one asked for. It is also one that many observers seem to miss in their analysis of Fed policy since the crisis.

Well, I was on twitter discussing long-term treasury yields and monetary policy with Tim Duy and Joel Wertheimer. I decided to whip up some charts comparing 1-year head NGDP forecasts from the Philadelphia Fed's Survey of Professional Forecasters against 10-year treasury yields. The results, in my view, are consistent with the claim that there was a monetary regime change in 2008.

First, here is the chart for the 1980:Q1-2007:Q4 period. It shows a fairly strong relationship between expected NGDP growth and long-term treasury yields: 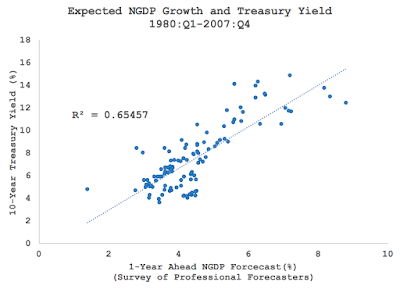 The next figure shows the relationship for the period since 2008:Q1. Say goodbye to that relationship: 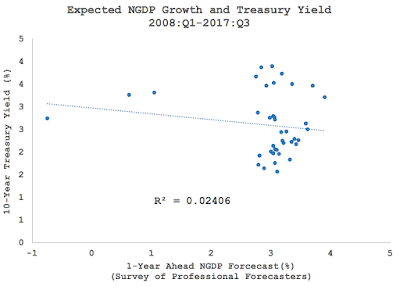 Just to be robust, I took out the outliers in the above chart (which are for the periods 2008:Q4-2009:Q2) and got the following chart: 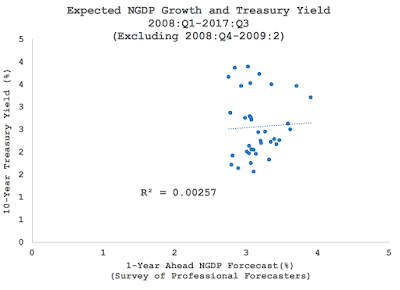 So something has changed in the relationship between expected NGDP growth and long-term treasury yields. The monetary regime change story outlined above coincides closely with this breakdown. Here is one way to connect these two developments. Before 2008 the Fed allowed its tightening to follow the pace of recovery, whereas afterwards the Fed has tended to get ahead of the recovery in its desired and actual rate hikes. If so, the Fed's tightening post-2008 would have slowed down the recovery and lowered the expected future path of short-term interest rates. This overreacting by the Fed would have kept long-term interest rates from rising with expected rises in NGDP growth. This type of behavior would also be consistent with a monetary regime change where only low rates of NGDP growth and inflation are tolerated. This is what appears to have happened in 2008.
Posted by David Beckworth at 11:31 PM