Regional Economic Activity in the USA

I have made several postings to this blog (here and here) about my recent move from the depressed Michigan economy to the vibrant Texas economy. This move really was an eye-opener for me on the amount of variation in regional economic activity. Below is a graph of the year-on-year growth rate of real economic activity (measured by the Philadelphia Fed's state coincident indicator series) in Michigan, Texas, and the USA. Notice how Texas over the past few years has been doing better than the USA while Michigan has been doing worse. 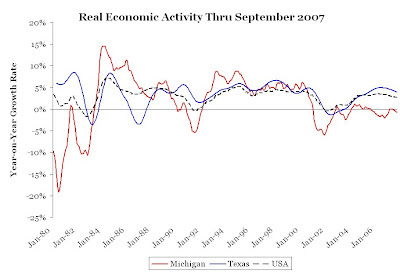 Gene Epstein picks up on this theme in his interesting article on regional economic differences in Barrons. I have excerpted the first part of his piece below:

Fifty States, Fifty Job Rates
By GENE EPSTEIN
"IF A RECESSION IS WHEN YOUR NEIGHBOR loses his job, and a depression is when you do, then our neighbors in Michigan have been suffering a recession for some time. But if, to put a new spin on the time-worn quip, an expansion is when your neighbor gets a better job, and a boom is when you do, then if you live in Texas, you're probably enjoying a boom.
That a boom and a bust could be happening at the same time, in the same country, only highlights an underappreciated fact: While the U.S. economy is a useful abstraction, it consists of many different economies, each with its own special story. State and regional data are not as timely as national data. But the recently issued Bureau of Labor Statistics release for September 2007 on regional, state, and certain local labor markets provides a reasonably timely update.
Nationally, the U.S. unemployment rate stood at 4.7% in September '07 (the October reading is due out this Friday), up marginally from 4.6% in September '06. While that technically qualifies as a growth recession -- economic growth accompanied by a rise in joblessness -- it's at rates of joblessness that are still historically low.
Now, unravel what that 4.7% is derived from, and we find widely different stories state by state, although not quite as widely different as in previous periods in history. Michigan, to begin with, is surely suffering a full-blown recession. The Great Lakes state's unemployment rate hit a 14-year high of 7.5% in September, up from 7.1% in September '06, giving it the dubious honor of having the highest jobless rate by far of any of the 50 states. (The runner-up: Mississippi, with a jobless rate of 6.4%.)
The unemployment rate in the Detroit area is one of the highest in Michigan, at 7.9% in September, up from 7.3% 12 months ago. And that, of course, is another way of saying that the main cause of Michigan's bust is the hemorrhaging auto industry, with woes in real estate only a supporting player. While the national economy has had substantial gains in jobs of around 6% since the last peak in the business cycle in early-2001, Michigan's employment tally is down around 6% from that peak.
Texas, by contrast, seems to be enjoying a boom. The second-most-populous state in the union has seen its unemployment rate fall from 4.8% in September '06 to 4.3% in September '07, close to a seven-year low. And at 10%-plus since early 2001, job growth has been much higher than the national rate."
(Read the Rest)
Posted by David Beckworth at 11:13 PM