Amid the carnage in the financial markets and the related response by the Fed, Edmund Phelps steps back to question modern monetary economics:

In recent times, most economists have pretended that the economy is essentially predictable and understandable...Today we are seeing consequences of this conceit in... central banking. "[R]ule-based" monetary policy, by considering uncertain knowledge to be certain knowledge, [is] taking us in a hazardous direction.

In the 1970s... a new school of neo-neoclassical economists proposed that the market economy, though noisy, was basically predictable. All the risks in the economy, it was claimed, are driven by purely random shocks -- like coin throws -- subject to known probabilities, and not by innovations whose uncertain effects cannot be predicted.

This model took hold in American economics and soon practitioners sought to apply it... Policy rules based on this model were adopted at the Federal Reserve and other central banks.

The neo-neoclassicals claimed big benefits from these changes... They asserted a decline in "volatility" in the U.S. economy and credited it to the monetary policy rules at the Fed.

Current experience is putting these claims to the test.

The claim for rule-based monetary policy is weak on its face. In deciding on the short-term interest rate it controls (the Fed funds rate) the Federal Reserve thinks about the "natural" interest rate -- the rate needed if inflation is neither to rise nor fall. Then the Fed asks whether the expected inflation rate is above or below the target. The Fed also asks whether the unemployment rate is above or below the medium-run "natural" unemployment level -- the level to which sooner or later the actual rate will return.

But the medium-run natural unemployment rate and the natural interest rate are anything but certain...

Phelp's discussion boils down to a RBC vs. New Keynesian interpretation of current events. He is arguing that maybe the economy is not temporarily deviating from its long-run trend growth path, but rather there has been a permanent shift. If so, then assumptions about the natural rate of interest and full employment can be way off the mark leading to distortionary monetary policies by the Fed.
Phelp's concern about a falling natural rate of interest seems particularly compelling at this time. Robert Gordon (via Michael Mandel) believes the productivity boom of the 1995-2004 is over. Since productivity is a key determinant of the natural interest rate, it stands to reason that the natural interest rate has fallen. This development would imply recent Fed actions may have a distortionary effect down the road. Below is a graph of trend productivity from Robert Gordon: 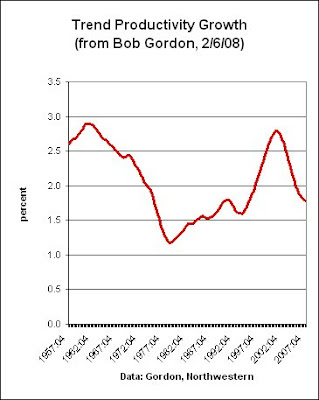 Posted by David Beckworth at 8:18 AM