In a recent paper, Robert Hall makes two interesting assertions about employment over the business cycle. First, the "Great Moderation"--the reduction in U.S. macroeconomic volatility since 1984--is only a feature of output, not employment. Second, employment falls during a recession not because of increased job losses, but because new jobs are harder to find. Both of these claims were news to me so I decided to dig into the data myself.

Regarding the first assertion, Hall provides a figure (Figure 1 in the paper) that shows the percentage deviation of employment from trend does not noticeably change since 1948. It is not clear how he constructed the figure, but here is a graph from the Fred database at the St. Louis Fed that shows the monthly percentage change in employment over the same period: 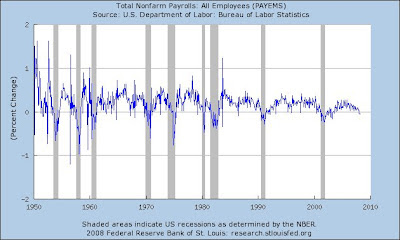 Visual inspection of this figure indicates that employment volatility has diminished since 1984. Hall, in fact, does concede there does appear to be some reduction using this approach, but he goes on to claim that it has not declined as much as with output. Here is what I found looking at the standard deviation of the quarterly growth rate for both real GDP and employment (data from Fred database again):

The reduction of the standard deviation is of similar magnitude for both real GDP and employment. I fail to see, then, how the "Great Moderation" is more a feature of output than employment.

Regarding the second assertion, Hall provides a figure (Figure 2) that shows percent of workers laid off since 2000 has been relatively stable. This table was constructed using data from the BLS's Job Opportunity and Labor Turnover Survey (JOLTS). Digging into this data I was able to get numbers on layoffs and other separations, as well as new hires. I have graphed the data below: 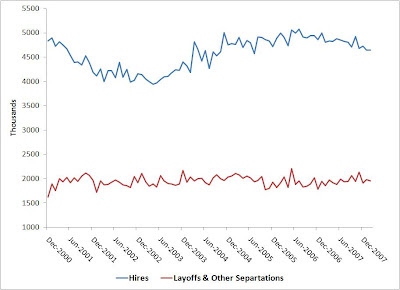 This figure supports Hall's second assertion that employment falls during a recession not because of increased job losses, but because new jobs are harder to find, at least for the period 2000-2007 (unfortunately the data only begins in 2000). The impact of 2001 recession, for example, is visible in hires but not in the layoffs and other separations. The economic weakening that began late last year shows a similar pattern. Again, this is not what I expected.

If these patterns hold up going forward, then any good macro theory should be able to explain them. This was the whole point of Hall's paper.
Posted by David Beckworth at 9:44 AM