Another Look at the Collapse of U.S. Domestic Demand

The big headline today is that real GDP in the United States actually contracted at annualized rate of 6.2%--versus the initial estimate of 3.8%--in the 2008:Q4. Buried in this GDP revision is an even more chilling number: U.S. domestic demand collapsed at annualized rate of 10.3%. This can be seen in the figure below. (Click on figure to enlarge.) 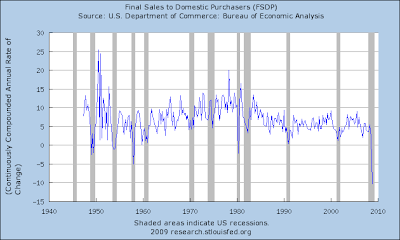 This means nominal spending is crashing in the United States. Addressing this collapse should be one of the top--if not the top--objectives of macroeconomic policy as recently noted by Scott Sumner, Samuel Brittan, and Martin Wolf. Such a large drop in domestic demand means either (1) a collapse in real spending and thus real economic activity and/or (2) deflation. Obviously the former is not good news, but the latter is also bad news since it can set off a deflationary spiral that leads to further real declines.
Posted by David Beckworth at 1:37 PM