Nick Rowe notes that many economists have a hard time thinking about "unorthodox" monetary policies since the dominant Neo-Wicksellian (i.e. New Keynesian) view focuses only on output gaps, inflation, and short-term interest rates as the sole problem facing central bankers. He explains that this paradigm has no meaningful role for money and it provides useless guidance--create inflationary expectations but wait, the the short term interest rate is already at 0%!-- for the current economic crisis. Nick, therefore, concludes we need to "revert to an older, earlier way of thinking" where monetary and credit aggregates were taken seriously. He suggests taking another look at Monetarism, or at least part of it. After all, if monetary policy cannot adjust prices (i.e. interest rates) anymore it has to start looking at adjusting quantities (i.e. monetary and credit aggregates). It is interesting that Nick's case for conditional monetarism finds merit in the work of Michael Bordo and Andrew Filardo. They have a paper where they argue for a "zonal view" which says monetary and credit aggregates can be meaningful for monetary policy depending on the state of the economy. Here are some key excerpts from the paper:

In this paper, we describe a hypothesis we call the zonal view of monetary policy and offer empirical evidence in support of it. Broadly speaking, the zones of interest span a range from high inflation (zone 1) to deep deflation (zone 5), with intermediate zones of moderate inflation (zone 2), low inflation (zone 3) and low deflation (zone 4). The implications of the zonal view go straight to the heart of the current monetary policy debate. Under the zonal view, the information content of quantitative measures of monetary policy such as the monetary aggregates (and credit aggregates in more financially advanced economies) versus, say, short-term real interest rates, depends on the inflation zone in which a central bank finds itself. Naturally, the inflation dependence of the zones should not be construed to represent a structural relationship, owing to the endogenous nature of inflation. But these zones might be best thought of as shorthand used to broadly characterize the policy environment, not least being the conservatism of the central bankers and the way in which economic agents update their inflation expectations. We will argue that these zones provide a simple but useful taxonomy to reflect historical regularities between the level (and variability) of inflation and the relative usefulness of the monetary aggregates and real interest rates as measures of the stance of policy.

In sum, monetary policy can eliminate deflation of any magnitude just as it can eliminate inflation. However, the appropriate monetary policy strategy depends on the inflation/deflation zone in which a central bank finds itself. Emphasizing the monetary aggregates appears, from a historical perspective, to be rather important during periods of high inflation and deep deflation. During periods of low inflation, velocity over short periods of time has shown a tendency to be more volatile and unpredictable than variation in the natural interest rate, thereby tilting the balance of the arguments toward the reliance on interest rate instruments in the conduct of monetary policy. However, in the zone of low inflation/price stability and low-to-moderate deflation, the influence of the zero lower bound for short-term nominal interest rates makes reliance on short-term interest rates more problematic; hence, the balance tilts toward the monetary aggregates playing a dominant role as the guide of choice. Finally, even though monetary policy has the ability to generate inflation, it cannot necessarily eliminate stagnation arising from deep-seated structural problems, especially a dysfunctional financial intermediation system. All of this points to a U-shaped pattern in the relationship between the zones and the usefulness of the monetary aggregates relative to real short-term interest rates as measures on the stance of monetary policy.

Below is a figure from the paper that nicely summarizes their view. (Click on figure to enlarge.) 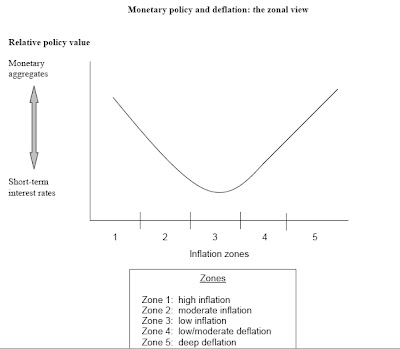 I heard Andrew Filardo gives this paper at a national meeting. As I recall, the discussant of the paper more or less dismissed it by invoking the New Keynesian view of the world. I wonder what that discussant thinks now.
Posted by David Beckworth at 4:02 PM