The Economic Crisis in One Equation

BmV = PY
With this equation of exchange we can now consider the economic crisis. First, assume that causality typically flows from the left-hand side of the equation to the right-hand side. It is well known what is happening on the right-hand side: both nominal and real GDP are plunging. Here is a figure showing monthly values for both series as well as the trend for 2003-2007. The data comes from Macroeconomic Advisers. (Click on figure to enlarge.) 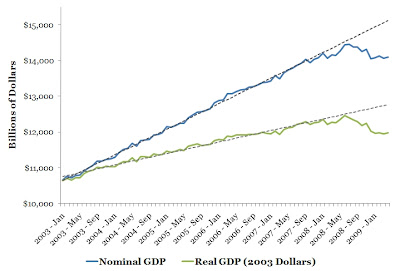 So what is driving these declines? From the left-hand side of the equation we know it could be (1) change in the monetary base, (2) a change in the money multiplier, a (3) a change in velocity, or (4) some combination of the above. Using the MZM measure of the money supply (see here for why MZM is preferred over M1 and M2), the figure below shows what has happened to the monetary base, the money multiplier, and velocity (Click on figure to enlarge): 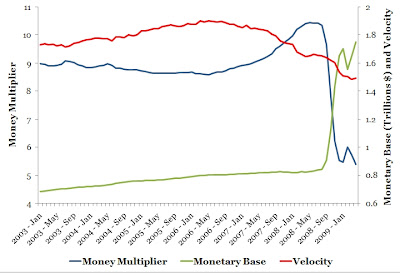 Source: Macroeconomic Advisers, St. Louis Federal Reserve
This figure shows that that declines in the money multiplier and velocity have both been pulling down nominal GDP. The decline in the money multiplier reflects (1) the problems in the banking system that have led to a decline in financial intermediation as well as (2) the interest the Fed is paying on excess bank reserves. The decline in the velocity is presumably the result of an increase in real money demand created by the uncertainty surrounding the recession. This figure also shows that the Federal Reserve has been trying to offset these moves by significantly increasing the monetary base. Therefore, the large increase in the monetary base has been far from inflationary; rather it is fighting off the deflationary forces created by by the declines in the money multiplier and velocity.

This figure also has several policy implications. First, remove any obstacles that hinder the money multiplier. That means cleaning up the bank's balance sheets and dropping the Fed's payment of interest on excess reserves. Unfortunately, neither of these seem imminent. Second, adopt policies that will increase velocity. As noted by Alex Tabarrok this is where fiscal policy could potentially play a role. So far, though, it appears from the figure that the current stimulus package is failing to arrest the decline in velocity. (One could ague, though, it is higher than it would otherwise be.) Alternatively, the Fed could do more to increase inflationary expectations which, in turn, would reduce real interest rates, decrease real money demand, and increase velocity. Third, there is no reason yet to pull the plug on the existing expansionary policies. Rather, as Paul Krugman notes (HT Mark Thoma) policymakers need to stay the course until it is clear that the money multiplier and velocity have recovered.
Posted by David Beckworth at 10:25 AM