Another Way to View the Crisis: A Boom-Bust Cycle in Global Nominal Spending

Many observers, including myself, have spent many hours thinking about the source of the current economic crisis. Much of the discussion in this debate has centered on the role played by the list of suspects rounded up so far: a saving glut in emerging economies, excessive fiscal and monetary policy stimulus in advanced economies, the securitization of finance, underestimating aggregate risk, the lowering of lending standards, the failings of rating agencies, aggressive lending tactics, and poor choices made by lenders. The truth is some mix of all of these played a role. That makes it difficult to apportion responsibility (or blame) accurately and, thus, makes it challenging to draw the appropriate lessons from this crisis moving forward. So in an attempt to simplify matters, this post presents the economic crisis from a different perspective.

So what is this perspective? This approach begins with the understanding that the key to macroeconomic stability--whether nationally or globally--is to stabilize nominal spending. If an economy is running near full employment, then any sudden increase or decrease in nominal spending will give rise to changes in real economic activity that fall outside its natural rate area (i.e. is unsustainable). Why? Because there are numerous nominal rigidities that prevent prices from adjusting instantly. There is simply no way to suddenly jar nominal spending and not have real economic activity move as well. Note, that key here is not to aim for price stability, but to aim for nominal spending stability. As I noted before,

Nominal spending shocks, after all, are the real source of macroeconomic volatility while inflation is merely a symptom of these shocks. Moreover, inflation can sometimes can be hard to interpret--Is the high(low) inflation due to positive(negative) aggregate demand shocks or negative(positive) aggregate supply shocks?--and as a result monetary policy that targets inflation may make the wrong call.

Now apply this thinking to the global economy. From 1980-2002 global nominal spending (as measured by world nominal GDP) in current U.S. dollars grew about 5.0% a year. In PPP current international dollars it grew 6.1% a year. Suddenly, in the period 2003-2007 those numbers jumped to 10.7% and 7.5%. (Data from WEO databse April 2009.) This surge in global nominal spending was sudden and most likely unexpected given the trends for the 1980-2002 period. These developments can be seen in the figure below: (Click on figure to enlarge.) 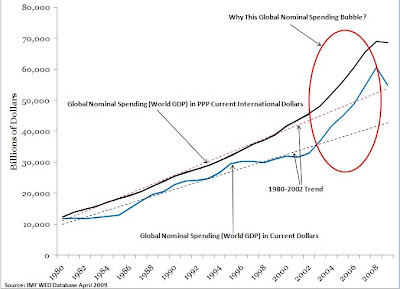 In short, the world experienced a nominal spending boom over the years 2003-2007 that was unsustainable. Today, the excesses related to that boom are being worked out.