Eurozone Periphery and the Euro

After reading Paul Krugman's anatomy of a Euromess, I thought I would look take a quick look at the Eurozone countries through the prism of the optimal currency area (OCA) framework. So what is the OCA framework? Here is my discussion of the OCA from a previous post modified to fit the Eurozone:

So where does the EU stand with regards to the OCA criteria? I went to the OECD database for some quick answers and here are some interesting data points I found. First, I looked at the correlation between the industrial production growth rate in the regional economies and the Eurozone. This reveals how similar the regional business cycles are with the broader European economy: (Click on figure to enlarge.) 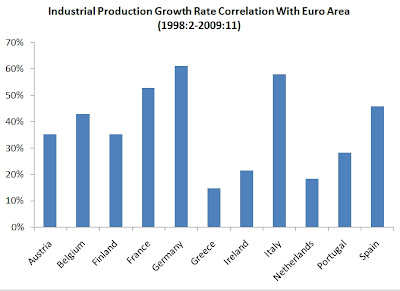 Greece, which is at the center of the current Euro crisis, is notably less in sync with the rest the of European economy. In terms of price flexibility I examined the average annual inflation rate over the 1998-2008 period. To the extent that higher inflation reflects the rigidity of downward price adjustment, it should provide some sense of price flexibility: 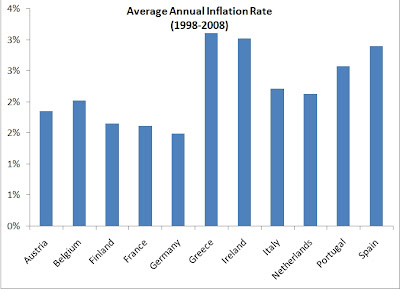 Here the periphery countries have the highest inflation rates. (This also means that they have also had a significant real exchange rate appreciation against the core Eurozone countries.) Next, I looked for some measure of labor market flexibility and the closet proxy I could find is the OECD's employment protection strictness (EPS) measure. Presumably, the greater the EPS the more rigid is the labor market. Below is the measure for 1998-2008: 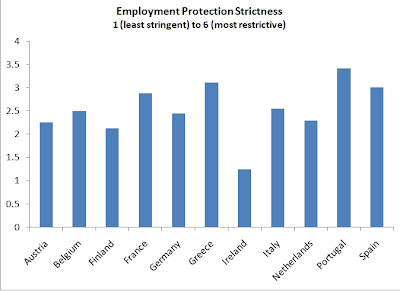 Here, Portugal, Spain, and Greece have the most stringent EPS over this time. If we add to the above findings the fact that there is no EU treasury providing fiscal transfers and that labor mobility is not where it should be then it seems reasonable to conclude some of the Eurozone periphery should not be in the currency union. Taking this quick analysis one step further, I rescaled the inflation and EPS measures and then took the average of them to create a shock absorber index where increases in its value indicate a greater shock absorbing ability. I then plotted this shock absorber index for each country against its industrial production correlation with the Euro industrial production: 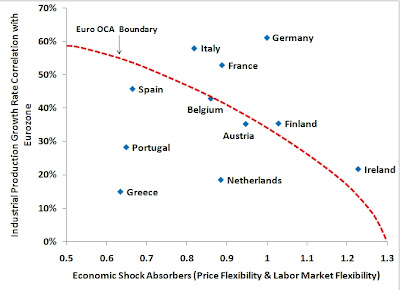 To make the graph complete, I added the red line which shows a hypothetical OCA boundary where countries on the outside of it have a sufficient mix of business cycle coordination and economic shock absorbing ability to be a part of the Euro OCA. This red line is purely a conjecture and used only to illustrate that somewhere there is a marker that separates those countries that are truly a part of the Euro OCA. Where it exactly falls is unclear. What does seem clear, though, is that some of the Eurozone periphery falls inside of it.
Posted by David Beckworth at 9:40 AM