Is This How The ECB Thinks?

Jürgen Stark is a member of the executive board of the European Central Bank.  He has a piece in the Financial Times that makes me wonder if the ECB really understands what it is doing.  Stark goes after commentators who question whether the ECB's monetary policy has been appropriate for the Eurozone.  He may be responding to folks like Ryan Avent, Kantoos, and myself who have argued that easier monetary policy would be in the best interest of preserving the Eurozone.  Doing so would cause a real appreciation for Germany and France while allowing a much needed real deprecation for the Eurozone periphery.  Unfortunately, he misses this important point and makes some rather astounding claims.  This one in particular was amazing:

My first reason for rejecting the commentators’ view is that in a monetary union, when setting interest rates, the central bank cannot do any better than take an area-wide perspective. This applies to any central bank. Consider the Federal Reserve: it cannot tailor its interest rate to the specific economic conditions in, say, Texas or California. Likewise in Europe, any attempt to favour national over eurozone developments would jeopardise the remarkable success of the single monetary policy in the eurozone: price stability in 17 countries and for 331m people.

This is absurd.  It is widely known that ECB monetary policy does not take an area-wide perspective,  but rather targets the German and French economies because of their disproportionate size in the currency union.  Studies have shown the ECB does a good job stabilizing these core economies, but is destabilizing when it comes to the currency union's periphery. David Wessel recently made this point with the following figure.  It shows the difference between the Taylor Rule interest rate and the actual short-term interest.  The smaller the difference the more appropriate the stance of monetary policy. 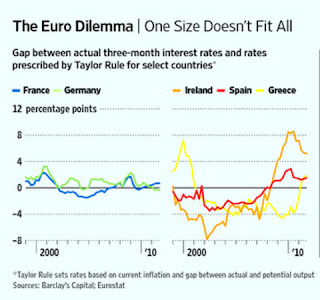 As you can see the interest rate gap is small for France and Germany and large for the troubled peripheries.  In fact, monetary policy was too loose in the early-to-mid 2000s and probably fueled some of the economic imbalance buildup in the peripheral economies.  Now monetary policy is too tight for them.  Does Stark really think the ECB was ever targeting anything other than the core countries? If he does and if his views are representative of the ECB leadership then the Eurozone days truly are numbered.
So what is Stark's solution to the current Eurozone crisis? Here are his solutions:

In other words the peripheral countries need to suck it up and endure some structural and deflationary pain.  Never mind that some of these countries imbalances were acquired because of the inappropriate monetary policy in past years.  Is this really the way the ECB thinks? I hope not.
Posted by David Beckworth at 2:26 PM