There is an interesting article on Bill Gross and PIMCO in The Atlantic.  It highlights PIMCO's decision to dump and then bet against U.S. treasury bonds.  According to Tyler Durden, the amounts involved are significant.  Bill Gross' explanation for these decisions is that the bond market is being artificially propped up by QE2 and once it ends so will bond prices.
These decisions have me stumped.  First, Gross' view assumes that the flow of QE2 purchases is what matters to bond prices.  There are good reasons to think, however, that it is the stock of QE2 purchases that matter.  If so, there should be no bond market correction since the Fed is not planning to sell its newly-acquired assets anytime soon. Second, given the weak economic outlook the expected short-term interest rates going forward should remain low.  That in turn should translate into low long-term bond yields.  Finally, if PIMCO's view were correct would not the bond market be pricing it in already? The figure below gives no indication of the U.S. bond market bottoming out.  If anything, there is a downward trend in the long-term treasury yield since the start of the year. 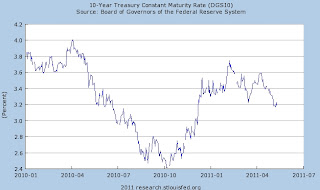 Now Bill Gross and the folks at PIMCO are smart.  They saw the housing bust well in advance and have made lots of money over the past few decades. So when they place so big a bet against U.S. bonds it should give us pause.  Maybe they are bond vigilante harbingers. Or maybe they are wrong.  For now the bond market seems to be supporting the latter view.
Posted by David Beckworth at 2:51 PM

Email ThisBlogThis!Share to TwitterShare to FacebookShare to Pinterest
Labels: Debt