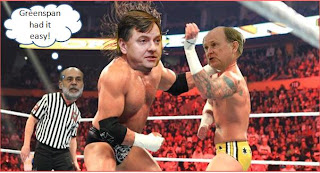 Unfortunately, not everyone on the FOMC appreciates level nominal GDP targeting like Charles Evans.  Thus, we end up with the half measures the FOMC is most likely to adopt this week.  These half-measures are not likely to spur a robust recovery, but are likely to attract further political criticism of monetary stimulus.  The Fed is digging its own grave.
Posted by David Beckworth at 1:55 PM