FOMC: We Got a Money Demand Problem 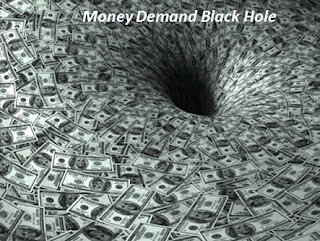 The FOMC minutes for the September, 2011 meeting were released today and the first things that stand out are the clear hawk-dove divide, the smorgasbord of additional ad-hoc monetary stimulus policy options that were discussed, and the increased economic pessimism of the members.  Something else, though, really caught my attention in the minutes.  It was this acknowledgement by the Fed staff:

In other words, we have rapid growth in M2 coming from a surge in money demand.  This is a big deal, because money is the one asset on every market and an increased demand for it will thus affect every other market.  The more money demand there is, the less nominal spending there will be on goods, services, and other assets.  This development means the economic slump is being prolonged.

How do we know this?  Well, start with the figure below.  It shows that the share of household's liquid assets (cash, checking account, time and saving deposits, money market accounts, and treasury securities) as a percent of all household's assets is closely tied to the swings in M2 velocity. 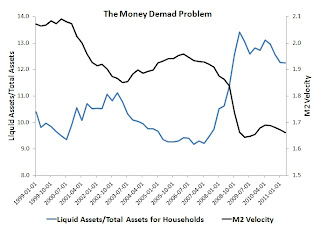 This next figure shows the actual dollar amounts.   From the peak of household asset values in 2007:Q2 to the latest data for 2011:Q2, households have lost around $8.8 trillion worth of non-liquid assets. Despite these large losses and the subsequent slump in personal-income growth, households have somehow increased their holdings of money and money-like assets by a staggering $1.6 trillion: 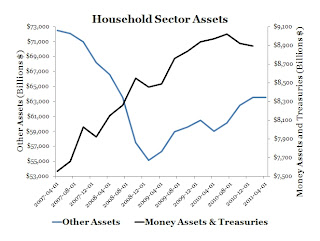 The composition of the increase in liquid assets is also interesting as seen in the next figure. Most of the increase has come in the form of time and saving deposits, though treasuries have been important too.  Money assets alone (cash, checking account, time and saving deposits, and money market accounts) have remained elevated and close to their peak value in late 2008. 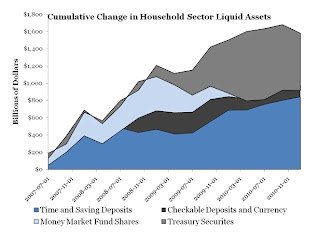 Now these graphs only take us through 2011:Q2.  To get a sense of what has happened since then we can look at the weekly M2 data which shows the spike mentioned in the FOMC minutes.  A closer look at the M2 data, however, shows that main growth is in saving deposits. The next figure vividly illustrates this growth: 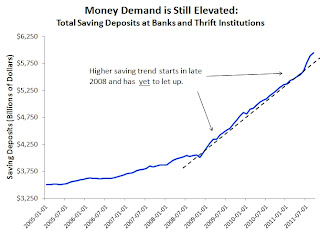 The growth of saving deposits is even more stark if viewed as percent of personal income: 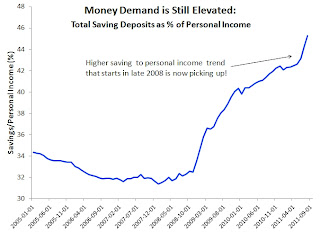 This last figures shows us that the growth in savings is clearly not an increase in money demand from income growth.  It is all about holding precautionary money balances.  And this is why nominal spending continues to slump.

So what can be done?  My own view is that the money demand problem could be fixed by properly shaping expectations about future spending and inflation via something like a nominal GDP level target.  Unfortunately, the latest FOMC minutes indicate that is not an option.  So for now we lumber on, hoping that in absence of forceful and systematic Fed actions the market will be able to heal itself in a timely fashion.

Update:  This figure from a previous post shows that share of liquid assets has been systematically related money velocity over the past 60 years or so.
Posted by David Beckworth at 6:15 PM