Why the Global Shortage of Safe Assets Matters

One of the key problems facing the world economy right now is a shortage of assets that investors would feel comfortable using as a store of value.  There is both a structural and cyclical dimension to this shortage of safe asset problem, with the latter being particularly important now given the recent spate of negative economic shocks to the global economy.  These shocks have elevated the demand for safe assets and, as David Andolfatto argues, is probably the key reason why we see such low yields on U.S. treasuries.  Of course, these same shocks have also destroyed many of the once-safe assets (e.g. European sovereign bonds) adding further strain to this asset-shortage problem.  This shrinking stock of safe assets can seen in the figure below created by Credit Suisse (ht FT Alphaville): 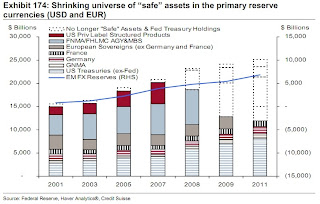 This figure shows that if one does not count French bonds as safe assets (a reasonable assumption), then about half of the safe assets disappeared by 2011. That is a tremendous drop and, as I see it, matters for two reasons.  Before getting into them, though, it is worth briefly reviewing the structural and cyclical dimensions to the asset-shortage problem.


The structural dimension is that global economic growth over the past few decades has outpaced the capacity of the world economy to produce truly safe assets.   Ricardo  Caballero, the author of this view, argues that it probably started with the collapse of Japaneses assets in the early 1990s, was exacerbated  by emerging market crises throughout the 1990s, and got heightened by the rapid economic growth of the Asia in the early-to-mid 2000s. These developments along with the fact that most of the fast growing countries have lacked the capability to produce safe assets made the assets shortage a structural problem.


The cyclical dimension is that the demand for and disappearance of safe assets was intensified by the failures of the Fed and the ECB over the recent business cycle.  In the early-to-mid 2000s, the Fed exacerbated the asset-shortage problem as its loose monetary policy got exported via fixed exchange rates to much of the emerging market world which in turn recycled it back to the U.S. economy via the "global saving glut" demand for safe assets.  (For more on this point see this post and my paper with Chris Crowe.)  Since late 2008, both the Fed and the ECB have worsened the asset-shortage problem by failing to first prevent and then restore nominal income in each region to its expected path.  In other words, since 2008 both the Fed and the ECB have passively tightened monetary policy and this has caused some of the AAA-rated securities to disappear. (Yes, some of the AAA-rated MBS and sovereign debt would have defaulted on their own, but some of them like French sovereigns would have maintained their safe asset status were it not for insufficient aggregate demand caused by passively tight monetary policy.)


Okay, so why does this safe asset shortage ultimately matter?  The first reason is that many of these safe assets serve as transaction assets and thus either back or act as a medium of exchange.  AAA-rated MBS or sovereigns have served as collateral for repurchase agreements, which Gary Gorton has shown were the equivalent of a deposit account for the shadow banking system.   The disappearance of safe assets therefore means the disappearance of money for the shadow banking system.  This creates an excess money demand problem for institutional investors and thus adversely affects nominal spending.  The shortage of safe assets can also indirectly cause an excess money demand problem at the retail level if the problems in the shadow banking system spill over into the economy and cause deleveraging by commercial banks and households.  All else equal, such retail level deleveraging causes bank assets like checking and money market deposits to fall relative to the demand for them.  In other words, the broad money supply falls relative to the demand for it.  The scarcity of safe assets matters, then, to the extent it creates an excess money demand problem that  adversely affects nominal spending.


The second reason the assets shortage matters is that it creates a Triffin dilemma for the producers of safe assets.  The original Triffin dilemma says that a country with the reserve currency of the world has to produce more money than is needed domestically to meet the global demand for it.  This, however, requires running  current account deficits that over time may jeopardize the very reserve currency status driving this dynamic.  Francis Warnock summarizes this paradox nicely:

To supply the world’s risk-free asset, the country at the heart of the international monetary system has to run a current account deficit. In doing so, it becomes more indebted to foreigners until the risk-free asset ceases to be risk-free.

Now apply this reasoning to the U.S. government that currently seems to be the preferred producer of safe assets for the world. If it is to meet the excess demand for safe assets it must run a larger budget deficit, a point made recently by David Andolfatto:

[G]iven the huge worldwide appetite for U.S. treasury debt (as reflected by absurdly low yields), this is the time to start accommodating this demand. Failure to do so at this time will only drive real rates lower.

But running larger budget deficits over time may jeopardize the safe-asset status of U.S. treasury debt, the very thing currently driving the insatiable demand for it. The global economy thus faces a Triffin dilemma for  the U.S. treasury, its go to safe asset.


There is way out of these problems.  Both the Fed and the ECB need to return aggregate nominal incomes in their regions to their pre-crisis trends and do so using a nominal GDP level target.  Being a level target it would keep long-run inflation expectations anchored while still allowing for an aggressive monetary stimulus in the short-run (i.e. until the pre-crisis trends were reached).  It would also stabilize nominal spending expectations and add more certainty to long-run forecasts.  More importantly, it would spur a sharp recovery that would that would lower the demand for safe assets and increase the stock of safe assets.  Both of these developments would in turn reduce the excess money demand problem and minimize the problems with the Triffin dilemma for U.S. treasury debt.  Unfortunately, we are a long way from either central bank adopting nominal GDP level targets.

Posted by David Beckworth at 3:09 PM