Could the Fed spark a robust recovery by raising its federal funds rate target?  For Bill Gross the answer is yes.  He believes a key reason holding back the recovery is that the Fed is engaged in a type of financial repression where financial intermediaries' net interest margins--the difference between their funding costs and lending interest rates--are being squeezed by the Fed's low interest rate policies.  He sees the Fed driving down interest rates across the yield curve and thus removing the incentive for lending.  If only it were that easy.

Gross is correct that higher interest rates are typically associated with strong economic growth, but has the causality backwards. The economy is not sluggish because interest rates are low. Rather, interest rates are low because the economy is sluggish. The demand for credit by households and firms simply is depressed.  They see uncertainty, lower-than-expected future income paths, on-going deleveraging, and consequently have pulled back on their borrowing.  There also has been an increase in domestic private savings for the same reasons.  And to pile it on, there is this global shortage of safe assets problem which causes foreigners to channel their savings here too.  All of these developments mean lower interest rates.

It is true that the Fed's large scale asset purchases (LSAPs) over the past few years probably have lowered the risk premium on long-term yields.  A spate of empirical studies, however, find that the effect of the LSAPs on long-term yields is modest at best.  The LSAPs, for example, cannot account for much of the 300 basis points plus drop in the 10-year treasury interest rate since 2007. What can explain it is the ongoing slump in the economy and the global demand for safe assets. Another way of saying this is that  even if there were no Fed, interest rates would probably still be very low.

If the central bank does not act quickly enough – and financial conditions deteriorate further – the central bank may end up just chasing the neutral rate down without ever reaching the level needed to provide monetary stimulus to the economy.

This is an excellent point, one that I want to illustrate using the IS-LM model.  Now the IS-LM is far from perfect, but it provides a simple and systematic way to think about interest rates.  Paul Krugman agrees and I want to follow up on his reply to Bill Gross with my own use of the model.

First the setup.  The standard IS-LM  model has two curves: the IS curve and the LM curve.  The IS curve shows the combinations of interest rates and real output where desired savings equals desired investment (or, alternatively, where spending equals output).  This curve is downward slopping.  The LM curve shows the combinations of interest rates and real GDP (Y) where the money market is in equilibrium. With the Fed targeting an interest rate, this curve is horizontal.  This is depicted below along with a full-employment or natural rate output (red) line, YNatural. The natural interest rate, iNatural , in this figure occurs where the IS curve intersects the natural output line.  (Click on figure to enlarge.) 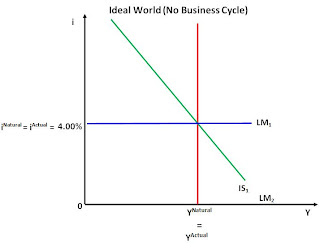 Note that in this figure there is no business cycle.  Actual output is being produced its at natural rate level and consequently the interest rate is at is natural rate level too.  Now imagine some negative shock increases desired saving and lowers desired investment.  That will cause aggregate demand to fall and push the IS curve from IS1 back to IS2 as seen below. 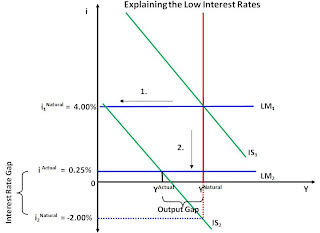 This causes the natural interest rate to fall from 4.00% to - 2.00%. The Fed, seeing the collapse in aggregate demand, lowers its policy rate to almost 0%, say 0.25%. That shifts the LM curve from LM1 to LM2. What is interesting here is that the Fed cannot lower its policy rate below 0%, yet it needs to in order to close the output gap and restore full employment.  But it cannot because of the 0% bound on nominal interest rates.  The economy stays in a slump and the Bill Grosses of the world conclude it is the low policy interest rates causing the problem.  They, therefore, think the Fed should raise interest rates (or shift up the LM curve). What they fail to see is that doing so would only further increase the gap between the actual and natural interest rate.  This would tighten policy and further sink the economy.


Now one of the reasons I am not a big fan of monetary policy targeting interest rates is that it creates this very kind of confusion.  Even if the Bill Grosses of the world did understand the above figure, it still creates the impression that once the 0% bound is hit monetary policy runs out of ammunition or at least has to switch to unconventional methods which itself can be confusing (e.g. what will the Fed do next?).  Instead of creating this confusion, it would be far better for the Fed to ignore interest rates and target aggregate demand itself via a nominal GDP level target.  If the Fed did, the Bill Grosses of the world would not be worked up about Fed policies depressing bank spreads via its low interest rate policy.  Rather, they would be currently worked up about the failure of the Fed to restore trend nominal GDP, the true cure for restoring net interest margins.  (Doing so in the model would shift back the IS and LM curves, and cause the latter to become upward slopping.)  My hope is that the Bill Grosses of the world come to appreciate this point and start actively calling for a nominal GDP level target.

P.S. Nick Rowe presents an alternative way to draw the IS-LM model for the current slump that is worth a look.

Posted by David Beckworth at 6:20 PM