The Most Important Idea Bernanke Did Not Discuss in His Lecture

Fed Chairman Ben Bernanke delivered his fourth lecture yesterday.  He used this lecture to showcase the Fed's response to the financial crisis. The Chairman covered a lot of ground in his talk but failed to discuss one of the most important ideas in understanding this crisis: the passive tightening of monetary policy.  This occurs whenever the Fed passively allows total current dollar spending to fall, either through a endogenous fall in the money supply or through an unchecked decrease in velocity.  This failure to act when aggregate demand is falling has the same impact on the stance on monetary policy as does an overt tightening of monetary policy. And the damage done by a passive tightening is no different than that of an overt tightening. The only difference is that the public is more aware of the overt form.

Bernanke agrees.  Back in late 2010, he acknowledged the possibility of passive tightening and used it as a justification for stabilizing the size of the Fed's balance sheet (my bold):

Any further weakening of the economy that resulted in lower longer-term interest rates and a still-faster pace of mortgage refinancing would likely lead in turn to an even more-rapid runoff of MBS from the Fed's balance sheet. Thus, a weakening of the economy might act indirectly to increase the pace of passive policy tightening--a perverse outcome. In response to these concerns, the FOMC agreed to stabilize the quantity of securities held by the Federal Reserve by re-investing payments...By agreeing to keep constant the size of the Federal Reserve's securities portfolio, the Committee avoided an undesirable passive tightening of policy that might otherwise have occurred...


Now all of this is important because a key reason for the financial crisis is that the Fed passively tightened monetary policy starting around mid-2008.  This can be seen in the figure below: 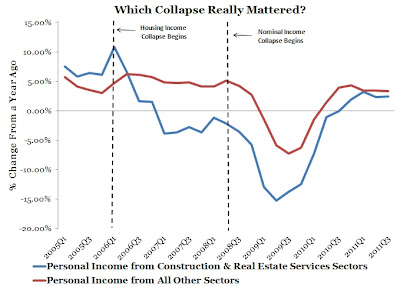 The figure shows that despite the fall in the growth rate of personal income from construction and real estate services that began in early 2006, personal income in the rest of the economy continued to grow at about 5% a year up through mid-2008.  The Fed was able to stabilize nominal incomes overall for almost two years while structural changes were taken place in those sectors closely tied to the housing boom.  This is a remarkable accomplishment and is especially clear when comparing construction employment with all other employment: 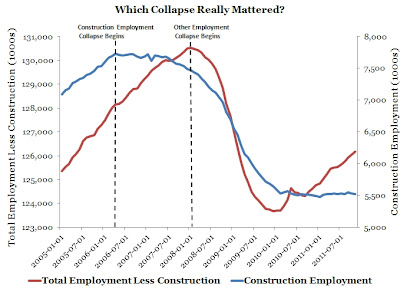 But around mid-2008 the Fed began failing to sufficiently respond to the decline in expected aggregate demand growth.  Thus, it began passively tightening around that time as can be seen in the two figures below.  The first figure shows the spread between the nominal and real yield on 5-year treasuries.  It fell about 170 basis points during the period leading up to the collapse of Lehman in September.  This decline in inflation expectations implies a decline in expected aggregate spending and thus a passive tightening of monetary policy. (Even if the spread was reflecting a heightened liquidity premium during this time the implication is the same. A heightened liquidity premium indicates increased demand for liquidity that, in turn, also implies less spending.) 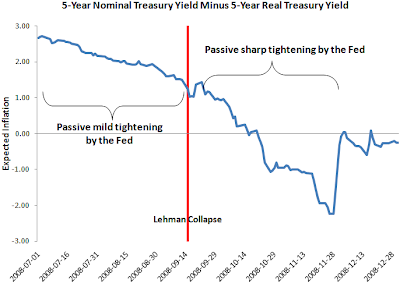 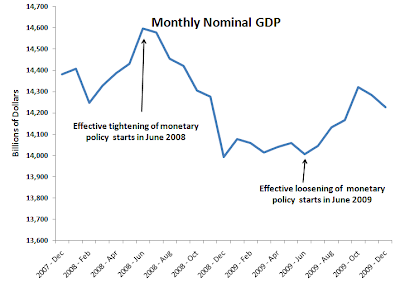 The Fed's failure to stabilize and restore aggregate demand meant it was passively tightening.  This failure to act was epitomized by the Fed's decision in September, 2008 to not lower the federal funds rate despite the collapsing economy.  This passive tightening is what turned a mild recession into the Great Recession.  Note that the financial crisis was a consequence of this failure, not the cause.   Just like in the Great Depression, the Fed's failure to stabilize aggregate demand lead to a severe financial panic.  But you will never hear Chairman Bernanke admit it.  For it would not be good PR for the Fed to acknowledge its failure.  And that is why Bernanke did not discuss the passive tightening of monetary policy in his lecture.
Posted by David Beckworth at 6:51 AM