Is the Fed Really Causing the Sustained Drop in Interest Rates?

Many observers claim the Fed, through its large scale asset purchases (LSAPs) and its forward interest rate guidance, has pushed down interest rates and compressed the yield curve spread.  Consequently, savers, investors, and financial intermediaries who need positive interest spreads have been harmed.  It's all the Fed's fault they say.  As I have pointed out before, this story falls apart because it ignores the fact that the term structure of the natural interest rate--the interest rate driven by the fundamentals of the economy--is being compressed too.  That is, given the weakened state of the economy the demand for credit is down, desired savings is up, and interest rates are falling as a result.  This explanation is a far better one for what we see in the following figure: 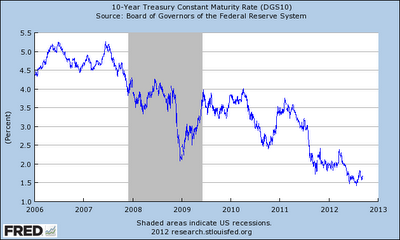 To believe the Fed is directly responsible for the low interest rates, one must believe it is capable of pushing the yield on the 10-year treasury from just above 5% to about 1.5% over a 5-year period.  That gives the Fed way too much credit.  This development is far easier to explain by talking about a depressed natural interest rate caused by the spate of bad economics news over this time (i.e. the 2008-2009 meltdown, the 2011 budget crisis, the ongoing Eurozone crisis).  One can say, however, the Fed has failed to sufficiently respond to the heightened money demand created by these shocks and therefore has failed to stabilize aggregate nominal spending.  This failure to act has allowed an economic slump to materialize which in turn has temporarily pulled down the natural interest rate.  So, indirectly the Fed has been harming savers, investors, and financial intermediaries, just not in the way most observers believe.

Further evidence that Fed policies are not an important factor directly pushing down treasury yields is that Fed purchases of U.S. public debt have not been that large relative to other purchasers.  In fact, the Fed's share of public debt is slightly lower than where it in the early 2000s as seen in the figure below: 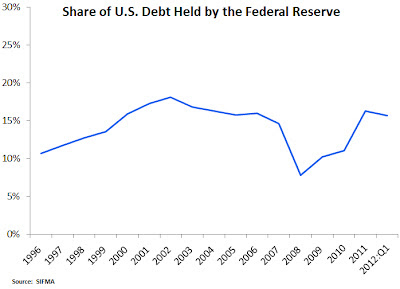 The figure below shows the biggest increases in U.S. public debt holdings over the past four years have come from foreigners and individuals.  Coming in fourth, after the Fed, are mutual funds.  This pattern makes sense given all the negative economic shocks over this time that has elevated the demand for safe (i.e. money-like) assets. 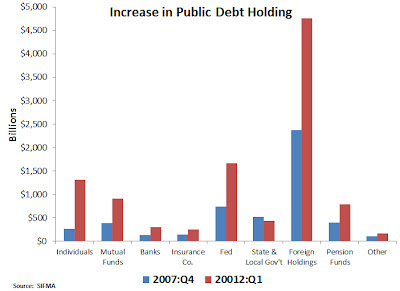