There Is No Fiscal Slope

Households and firms make economic decisions based on how they expect the future to unfold.  If households expect higher future incomes they are more likely to increase consumption spending today. Likewise, if firms expect higher future sales they are more likely to increase investment spending today. Economic expectations are therefore key to understanding current decisions about aggregate nominal spending. They are also why I think it is is a mistake to talk about a "fiscal slope" like this:

But there is not really any kind of “cliff” in the sense that if you stepped over the edge, you would fall fast, land on something hard, and not get up for a long time. In the modern US economy, the scheduled changes constitute more of a fiscal “slope” – meaning that the full effect of the tax increases would not be felt immediately (income withholding takes time to adjust), while the spending cuts would also be phased in (the government has some discretion regarding implementation).

If households and firms expect the economy to get much worse because of this fiscal tightening--and they have no reason not to given all of media coverage--it does not matter that it is will unfold slowly over next year. They will change their behavior today in anticipation of this fiscal cliff and make it a self-fulfilling outcome.  So unless the Fed offsets the fiscal tightening, there is no fiscal slope.  It is a pipe dream.


This understanding may shed some light on recent developments in expected inflation that have folks like Ryan Avent worried. Expected inflation, as measured by treasury breakeven rates, during this crisis has been a good indicator of the market's economic outlook. Higher expected inflation implies higher future nominal spending. Given the current slack and nominal rigidities, higher expected nominal spending in turn implies higher future real economic growth. That is why the stock market has closely tracked this indicator over the crisis as seen below: 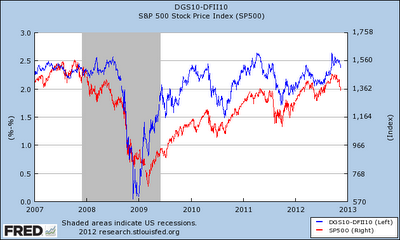 But lately expected inflation has been falling.  Here is Ryan Avent:

[S]ince mid-October, there has been an unmistakable reversal in the inflation-expectations trend. Based on 5-year breakevens, all of the September spurt has been erased. And 2-year breakevens are back at July levels. Given my optimism over the Fed's September moves and the apparent strength of underlying fundamentals in the economy, I would like to disregard this trend, but one should be very reluctant to abandon guideposts that have served one well just because they've moved in an inconvenient way.

Avent goes on to speculate why expected inflation would be falling now. He cites as possible explanations an expected economic slowdown elsewhere in the world or the breakdown of the relationship between expected inflation and demand growth.  There is a third alternative: markets in mid-October began to price in the increasing likelihood of the fiscal cliff materializing since they realized President Obama was probably going to win reelection.  This fits nicely with the fact that the decline in expected inflation is being matched by a sustained fall in the stock market, indicating the relationship is still strong.  This can be seen in the figure above or in the close up below: 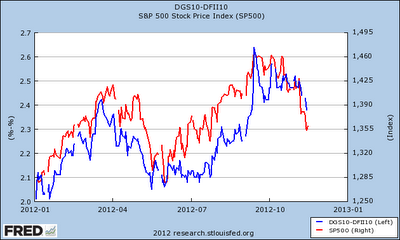 If this interpretations is correct, then it supports the view that it is a mistake to hope for a fiscal slope.  Expectations matter.
Posted by David Beckworth at 12:25 PM