Bank depositors in Cyprus learned today of a planned heist on their funds. It was a well organized one that will take 6.75% of all small deposit accounts and 9.90% of all large depositor accounts. What is truly shocking about this heist is that it was planned by the EU and IMF and applied to funds, at least for the small depositors, that were supposedly government insured (i.e. risk free). This is what we call a major shock to expectations.

Now the depositors do get bank equity in exchange and some observers note this heist is not as bad it could be--the alternative could have been a complete financial collapse--but from a broader perspective these excuses miss the mark. The very reason the crisis has got to the point that bailouts or "bail-ins" are needed is because the Eurozone was a flawed monetary union from the start. It never met the criteria of an optimum currency area and its monetary policy has effectively been geared toward Germany. Thus, at the advent of the Euro, the ECB policy interest rate was close to what a Taylor rule would predict for Germany, but far too low for the periphery. Likewise, since the crisis the policy rate has been close to what a Taylor rule would predict for Germany, but too high for the periphery. In both cases, ECB policy has been destabilizing to the periphery. That is why, despite being in the midst of a crisis, the ECB explicitly tightened monetary policy in 2011 by twice raising its policy rate. It is also why the ECB has implicitly (or passively) tightened policy over the past few years as evidenced by the flatlining of the broad money supply and nominal GDP. In short, the boom-bust cycle of the Eurozone periphery that helped make the Cyprus financial crisis is largely the result of a flawed monetary system biased toward Germany.

But that part is not new. What is new is the unexpected seizing of depositors funds. As Lars Seier Christensen, Ed Conway, Felix Salmon, and Frances Coppola note, this sets a dangerous precedent for all Eurozone bank deposits.  Here is Coppola:

[T]he fact is that deposit insurance everywhere in the EU has now been undermined. The precedent has been set for insured depositors to suffer losses in order to protect Russian oligarchs and reckless banks. If the Eurogroup can impose this on Cyprus, it can do so elsewhere too.

Yes, EU leadership promised this action was a one-off event, but the fact that they had to make this promise is a sign that they no longer can be trusted. Just imagine what you would be thinking now if you were a resident of troubled periphery economy and had funds in your bank account. I suspect it would be whether my bank was next and whether I needed to get my funds out ASAP. It is almost as if the EU and IMF were trying to create a banking panic in Europe.

What the EU and IMF did to Cyprus today is poised to be a repeat of what happened to U.S. banking in 1933. In February of that year, the governor of Michigan declared a statewide banking holiday as a means to resolve an impasse on how to wind down an important bank in Detroit. Like the Cyprus action today, the governor's actions back then sent chill waves across a continent, as depositors in other states began to wonder if their governors would also call bank holidays to prevent withdrawal of funds. The fear was so poignant, that the Ohio governor made it a point to declare the bank holiday would not happen in Ohio. But it was too late, the die had been cast. By March 1933, 48 states had declared some form of bank withdrawal restrictions as the bank panic spread and fed upon itself. Only with FDR's national bank holiday and the advent of national deposit insurance in March, 1933 was the bank panic stopped.

What is crazy about the Cyprus heist today is that it has the potential to create the same self-fulfilling bank panics across Europe, but without the benefits of a unified treasury to credibly commit to Eurozone deposit insurance. I can't help but hear the echoes of 1933 now unfolding in Europe.

Update I: Our friend Lars Christiensen, the Market Monetarist one, also weighs in with good thoughts.
Update II:  A fitting picture on the Cyprus heist: 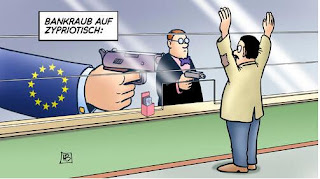 Posted by David Beckworth at 1:21 AM