Is the Fed Squeezing the Shadow Banking System?

Some observers believe the Fed's large scale asset purchases (LSAPs) are actually a drag on the economy. They note that the Fed's purchases of treasuries is reducing the supply of safe assets, the assets that effectively function as money for the shadow banking system. They do this by serving as the collateral that facilitates exchange among institutional investors. Critics, therefore, contend that LSAPs are more likely to be deflationary than inflationary. A recent piece by Andy Kessler in the WSJ typifies this view:

So what's the problem? Well, it turns out, there's a huge collateral shortage. Global bank-reserve requirements have changed, meaning more safe, highly liquid securities like Treasurys are demanded instead of, say, Greek or Cypriot debt. And lately, Treasurys have been getting harder to find. Why? Because of the very quantitative easing that was supposedly stimulating the economy. The $1.8 trillion of Treasury bonds sitting out of reach on the books of the Fed is starving the repo market of safe collateral. With rehypothecation multipliers, this means that the economy may be shy some $5 trillion in credit...

[T]the Federal Reserve's policy—to stimulate lending and the economy by buying Treasurys, and to keep stimulating until inflation reaches 2% or unemployment is lower than 6.5%—is creating a shortage of safe collateral, the very thing needed to create credit in the shadow banking system for the private economy. The quantitative easing policy appears self-defeating, perversely keeping economic growth slower and jobs scarce.

So is the Fed really "squeezing" the shadow banking system as Kessler claims? Are the LSAPs actually stalling the recovery rather than supporting it? In a word, no, as this view misses the forest for the trees at two levels. First, by focusing on the Fed's LSAPs of safe assets, this understanding overlooks the more important contributors to the safe asset shortage. Second, this view takes a static view. It doesn't consider the dynamic effect of LSAPs on the supply of private safe assets. Let's consider each point in turn.

First, the main reasons for the safe asset shortage are (1) the destruction and slow recovery of private label safe assets since the crisis and (2) the elevated demand for safe assets that has arisen during this time. The importance of the first develpment can be seen in the figure below. It shows the Gorton et. al. (2012) measure of safe assets broken into government and privately-created safe assets. The figure shows an almost $4 trillion dollar fall in private label safe assets during the crisis. The Fed's purchases of treasuries has no direct bearing on this private supply shortage (though I will argue below it has a positive indirect effect on it). 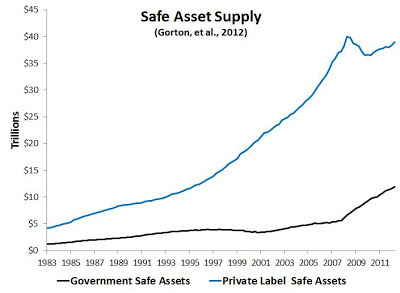 This reduction in the supply of safe assets occurred, of course, just as the demand for safe assets were rising in 2008. Since then, a spate of bad news--Eurozone crisis, China slowdown concerns, debt limit talks, fiscal cliff talks--has kept the demand for safe asset elevated as well as new regulatory requirements requiring banks to hold more safe assets. It is these developments that are the real stranglehold on the shadow banking system.1

Still, Kessler and other critics are correct to note that the immediate effect of the Fed's LSAPs, even if relatively minor, is to reduce collateral in the shadow banking system. However, this narrow focus misses the potential for the LSAPs to catalyze the private production of safe assets. The LSAPs, if done right, should raise expected economic growth going forward and cause asset prices to soar. This, in turn, would increase the current demand for and supply of financial intermediation. For example, AAA-rated corporations may issue more bonds to build up productive capacity in expectation of higher future sales growth. Financial firms, likewise, may start providing more loans as the improved economic outlook makes households and firms appear as better credit risks. Critics like Kessler miss this dynamic effect of LSAPs. 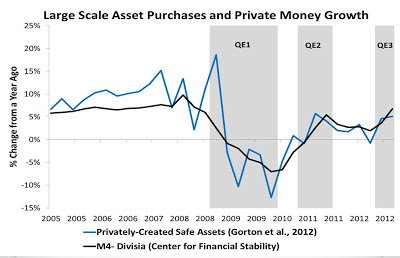 QE3 is still ongoing and continues to support more private safe asset creation. The recent rise in treasury yields is another sign of this process as it indicates a rebalancing of portfolios toward, among other things, private safe assets. Now there is a long ways to go before there will be enough private safe assets to restore full employment NGDP growth. But we are on the way--the only way since there is a limit to the amount of safe assets the government can provide without jeopardizing its risk-free status--and this should not be ignored by critics like Kessler.

The appropriate critique, then, of the Fed is not that it is squeezing the shadow banking system, but that it has failed to do enough to undo the stranglehold on it coming from the shortfall of private safe asset creation and the elevated demand for safe assets.


1The figure shows that government safe assets have partially offset the private label shortfall. I estimate there is still a U.S. safe asset shortfall of about $4 trillion. This shortfall can be seen in this figure which shows the amount of safe assets needed to hit full employment NGDP. The amount of safe assets needed to hit the pre-crisis trend NGDP path and CBO full-employment NGDP is calculated as follow. I solve for the optimal amount of money in the equation of exchange given an optimal amount of Nominal GDP (the pre-crisis trend and CBO values) and actual trend money (safe asset) velocity as estimated by the Hodrick-Prescott filter. That is, I am solving for M* in M*t= NGDP*t/V*t .
Posted by David Beckworth at 12:18 PM