What George Bailey Can Teach Us About QE

Quantitative easing (QE) is a lot like George Bailey in the classic film It's a Wonderful Life. George was a man who began questioning his value to society. A number of cascading events--unfulfilled life dreams, a run on his bank, lost bank deposits, bank fraud charges--made it appear to hm that he was on balance a drag on his community. George decided it would be better for all if he 'tapered' or ended his life. Fortunately, an angel appeared at the last minute and revealed that despite his immediate problems, George's overall contributions to society were immense. Many lives were saved and changed because of his efforts. All that was needed to see this fact was a broader, longer perspective. George Bailey, in other words, was not doing the right counterfactual.

The same is true for skeptics of QE. Many point to the apparent flaws of the Fed's large scale asset purchases (LSAPs), but fail to step back and consider the counterfactual of what would have happened in their absence. This point is particularly poignant to those observers who claim the Fed's LSAPs of treasuries are particularly bad because they drain the financial system of safe assets. These critics note that these safe assets serve as collateral in the shadow banking system and thus facilitate transactions. Therefore, when the Fed increases its balance sheet it is actually restricting the funding capabilities of the shadow banking system and creating a drag on the economy. A growing number of smart people are making this point, including Izabella Kaminski, Tyler Cowen, Peter Stella, Arvind Krishnamurthy and Annette Vissing-Jorgensen, and Michael Woodford. I contend that while correct on the immediate effect of LSAPs, these critics like George Bailey are doing the wrong counterfactual. The right counterfactual is what would have happened had there been no QE2 and QE3 at all.

Before delving deeper into this counterfactual, I want to mention two other points about this critique. First, most of the safe asset shortage was created by factors other than the Fed's LSAPs. On the supply side, there was the destruction and subsequent anemic recovery of private-label safe assets as seen in this figure. On the demand side, the financial crisis and then a spate of subsequent bad economic news--Eurozone crisis, China slowdown concerns, debt limit talks, fiscal cliff talks--has kept the demand for safe asset elevated. Also, new regulatory requirements requiring banks to hold more safe assets is keeping safe asset demand elevated.

Consequently, forces other than QE2 and QE3 have been driving much of the safe asset shortage. This can be seen in the figure below which shows the treasury general collateral repo rate and the Fed's share of marketable treasury securities. Note that the largest drop in the repo rate (reflecting the reduced supply and increased demand for treasuries collateral) occurred between late 2007 and early 2009, the very time the Fed was releasing treasury securities back into the market. 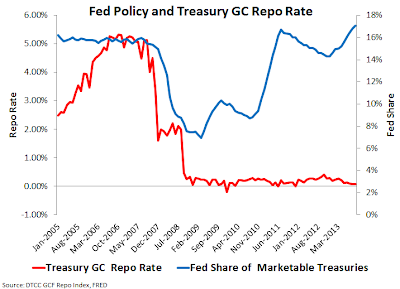 Second, even though the LSAPs do cause an immediate drain of safe assets, they potentially lead to more private safe asset creation. As I noted before:

The LSAPs, if done right, should raise expected economic growth going forward and cause asset prices to soar. This, in turn, would increase the current demand for and supply of financial intermediation. For example, AAA-rated corporations may issue more bonds to build up productive capacity in expectation of higher future sales growth. Financial firms, likewise, may start providing more loans as the improved economic outlook makes households and firms appear as better credit risks.

There is some evidence this is happening with QE2 and QE3. Even if these private safe assets are not used as collateral in the repo markets they will be used elsewhere to satiate liquidity demand. That, in turn, should free up more treasuries for use in the repo market. Both of these points are often overlooked by QE critics.

Now back to the counterfactual point. Are QE critics really making the same mistake as George Bailey? To answer that question, let's think through the counterfactual of no QE2 and QE3. First, assume the Fed's share of marketable treasuries was constant over this period. Also, assume that the shocks from the Eurozone crisis, China slowdown, debt limit and fiscal cliff talks still buffeted the U.S. economy during this time. What would have happened to the U.S. economy? Could the U.S. economy have been as resilient to these shocks had the Fed not been supporting it? If not, then imagine the mess in the financial system and what that would have done to the demand for safe assets. Repo markets, for example, would probably be facing an even larger collateral shortage. A reasonable counterfactual, then, is that the safe asset problem would be greater were it not for the Fed's QE programs.


I took this idea to the data. I estimated a vector autoregression (VAR) over the 2003:1 to 2013:8 period and used it to create a counterfactual path for the 2010:10 to 2013:8 period.1 This corresponds to the QE2 and Q3 periods. VARs are great for this type of exercise because one, they allow the variables in the model to interact and two, you can do dynamic forecast with them. The only twist here is that I did a conditional dynamic forecast. Specifically, I dynamically forecasted what would happen to employment, the stock market, PCE core inflation, and the repo rate conditional on (1) the Fed not increasing its share of marketable treasuries and (2) allowing the Eurozone crisis, China slowdown, and fiscal policy shocks to still affect the economy. For the latter, I used the actual, realized values of the economic policy uncertainty index over the forecasted period as a way to summarize and include these shocks in the VAR. The results can be seen in the figures below.

The first figure shows counterfactual path for the Fed's share of marketable treasuries used in the forecast. 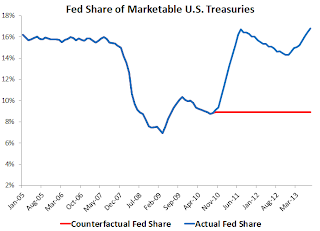 The next figure shows what happens to the stock market. It declines over much of the period. 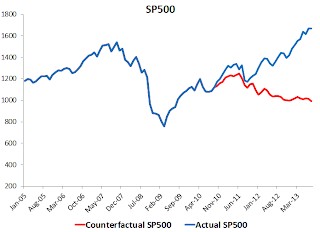 The following figure reports the counterfactual path for employment. Again, not a pretty picture. 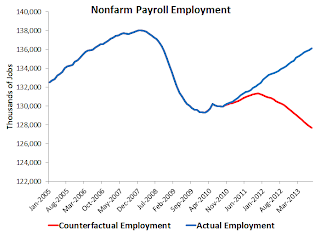 This next figure shows that core PCE inflation stays around 1% and never recovers. So QE is inflationary, at least relative to where inflation would be in its absence. 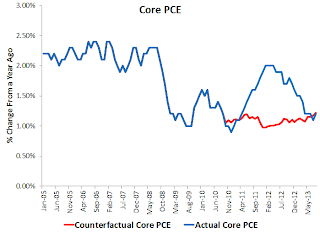 Finally, this figure shows that the repo rates would have gone negative. Now this would not happen in practice because of the ZLB. But the VAR does not know the ZLB and simply forecasts based on estimated relationships. The fact, though, that it goes significantly negative is instructive. It indicates the repo markets would have faced even greater collateral shortages had the Fed not done QE2 and QE3. 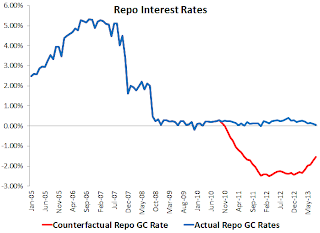 Now we do not want to read too much into these results. They come from a forecasting model that is far from perfect. Still, they indicate that a proper counterfactual of the QE programs requires more than just narrowly looking at the immediate impact of LSAPs on the collateral asset supply. We do not want to be like George Bailey and do the wrong counterfactual. Neither should the Fed. Otherwise, it too may be tempted to pull the trigger and taper too soon.

My assessment is that QE2 and QE3 has done more to shore up the U.S. economy than many observers realize. We do not know how much worse the economy would be in their absence, but the analysis above suggests it could have been ugly. With that said, the QE programs have been flawed because of their ad-hoc, make-it-up-as-we-go-along approach that until recently was not tied to any explicit target. Tying the LSAP more firmly to conditional outcomes would do much to improve them. The more rule-like and predictable the better.  I think George Bailey would agree.

1The VAR was estimated with the Fed share of market treasuries, the log of SP500, the log of employment, the core PCE inflation rate, the repo rate, and the economic policy uncertainty index. Six lags were used on the monthly data. The results were generally robust to longer lag lengths, but due to limited data six lags were chosen. The conditional forecast was created by imposing fixed values for the Fed share and the uncertainty index as noted above.
Posted by David Beckworth at 1:27 PM