A common theme on this blog has been that the Federal Reserve is a monetary superpower. Consequently, it has had an outsized role in shaping global liquidity conditions. Here is how I explained it before:

I have made the case many times that the Federal Reserve is a monetary superpower. The Fed has this power because it manages the world's main reserve currency and many emerging markets are formally or informally pegged to dollar. As a result, its monetary policy gets exported to much of the emerging world. The ECB and Bank of Japan are also influenced by the Fed's decisions because they are careful not to let their currencies becomes too expensive relative to these dollar-pegged currencies and the dollar itself.  U.S. monetary policy, consequently, gets exported to the Eurozone and Japan as well.

This understanding helps explains why there was a global liquidity glut during housing boom period and suggests that some of the "global saving glut" was simply a recycling of loose U.S. monetary policy.  It also implies that the Fed could now do a lot of good for both the U.S. and Eurozone economies if were to adopt something like a NGDP level target.  Based on this view, the global economy sorely needs the Fed to wake up from its slumber. Fed Chairman Ben Bernanke admitted as much in one of his classroom lectures earlier this year

Lars Christensen makes a compelling case that China also acts as a monetary superpower, at least for the emerging markets and commodity exporters. The actions, then, of both the Federal Reserve and the People's Bank of China (PBoC) matter immensely to the rest of the world. This seems especially true now as the expected tightening of monetary policy by these central banks is hitting emerging market hard. Ambrose Evans-Pritchard reports :

Turkey, India, Brazil and a string of emerging market countries are being forced to tighten monetary policy to halt capital flight despite crumbling growth, raising the risk of a vicious circle as debt problems mount.


The emerging market bloc makes up half the world economy, far higher than in any previous crisis. The International Monetary Fund warns that the sheer weight of these countries' rate raises could lead to a “blowback” effect that ultimately hits the US, Europe and Japan as well.
“The epicentre of the global financial storm had shifted to emerging markets from Europe, and this third phase of the global financial crisis is intensifying. We are still in the very early stages,” said Stephen Jen from SLJ Marcro Partners.

Simultaneous monetary tightening by China’s central bank and the US Federal Reserve has been the trigger for latest rout, so any sign that either Beijing or Washington is having second thoughts is an instant tonic for investors.

“We have all these countries in trouble like Argentina, Ukraine and Thailand that are each local cases, but behind the whole emerging market story is Fed tapering and worries about slowing Chinese growth,” said Lars Christensen from Danske Bank. “China is now a global monetary superpower, co-leader with the US. When China tightens, that hits trade and commodities across the world.”

Even though the actions of the Federal Reserve and the PBoc may have been the catalyst to these latest worries, the emerging markets could have been better prepared for the inevitable tightening:

“Emerging economies squandered precious opportunities in the past decade to reform and restructure for the new globalised world. Instead, they rode on the coattails of China and ample global liquidity,” said Mr Jen, a former IMF firefighter.

Be that as it may, the interesting question going forward is how policymakers will respond. India and Brazil have already incrementally raised their policy interest rates. And today we learned that Turkey decided to one-up them by going the "shock and awe" route: it raised its interest rate target from 7.75% to 12.00%. I am all for utilizing the power of expectations, but this sharp rate hike could end badly. Will the Federal Reserve also respond to these developments? We find out tomorrow.

Addendum: The growing importance of the emerging markets to the world economy can be seen in the figure below. 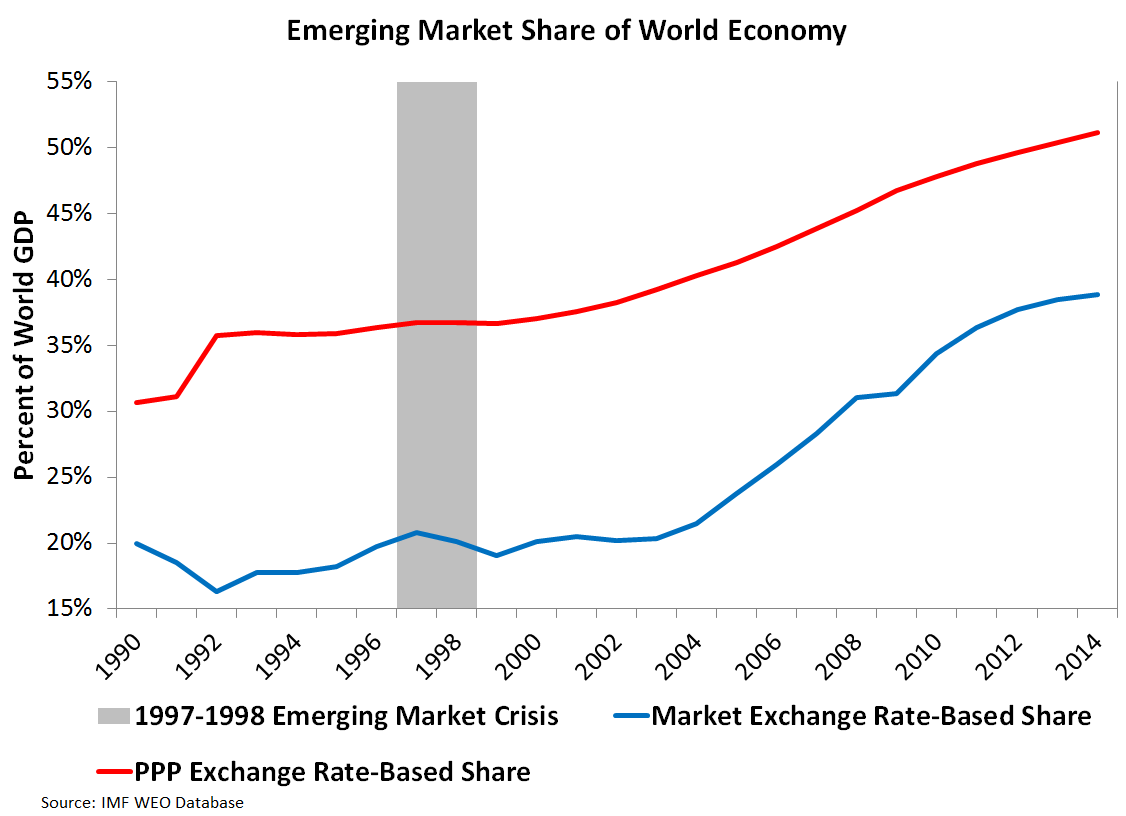 Posted by David Beckworth at 5:22 PM