Inflation-targeting central banks are in an awkward position. Their objective is to stabilize the rate of inflation, but they now face a development that could jeopardize it: the surge in oil production that is driving down oil prices. The decline in oil prices is a much-needed boon to the global economy, but it may also mean inflation temporarily drops beneath its targeted value.  What to do? David Wessel calls this development a wrinkle for central bankers:

On balance, falling oil prices are welcomed by the world’s major central banks, but there is a wrinkle. Lower oil prices are good for growth in the U.S., Europe, and Japan. But they’ll also reduce the headline inflation rate at a time when the central banks, particularly the Bank of Japan and the European Central Bank, are struggling toraise the underlying inflation rates in their economies and keep public and investor expectations of inflation from falling. That involves a lot of psychology as well as economics. While central bankers often look beyond volatile food and energy prices to gauge the underlying inflation rate, they know that ordinary consumers don’t. “It’s important that [the drop in oil prices] … doesn’t get embedded in inflation expectations,” the ECB’s Mario Draghi said last week.

This wrinkle has generated a lot discussion on how the Fed should respond. As noted by Cardiff Garcia, both Fed officials and commentators are divided over it. This wrinkle, in short, is adding some uncertainty about the future path of monetary policy.

The interesting thing about this wrinkle is that it is not a new problem. It is just the latest supply shock which always have been problematic for inflation-targeting central banks. Supply shocks push output and inflation in opposite directions and force central banks into these awkward positions.

Supply shocks were an issue in 2002-2004 when the much-ballyhooed productivity boom (a positive supply shock) of that time made Fed officials worry about deflation. They consequently kept interest rates low even though the housing boom was taking off. Supply shocks were also an issue in the fall of 2008 when Fed officials were concerned about rising commodity prices (a negative supply shock) and, as a result, decided to do nothing at their September FOMC meeting despite the collapsing economy.

Across the Atltantic, the ECB has struggled even more with supply shocks. The ECB raised interest rates multiple times in 2008 and 2011 in response to the commodity price shocks (negative supply shocks). Below is a figure from a Robert Hetzel paper on this crisis that shows how misguided the rate hikes were. They occurred even though spending was already falling. It is no wonder the Eurozone has struggled so much since 2008. 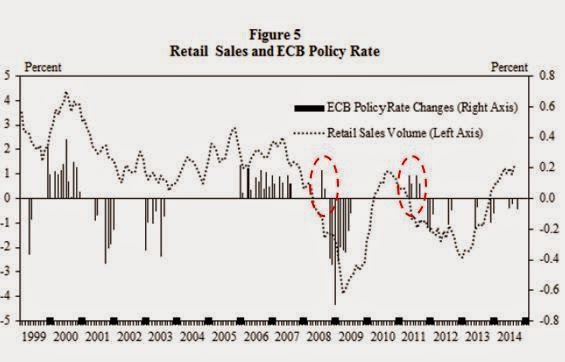 One can trace this wrinkle back further. Ben Bernanke, Mark Gertler, and Mark Watson argue the reason oil supply shocks have historically been tied to subsequent weak growth is not because of the shocks themselves, but because of how monetary policy responded to those shocks. That is, central banks typically responded to the inflation created by the supply shocks in a destabilizing manner. With the advent of inflation targeting in the early 1990s, this wrinkle has become institutionalized across most central banks.

Now in theory modern inflation targeting should be able to handle these shocks. For the modern practice is to do 'flexible inflation targeting' which aims for price stability over the medium term and therefore allows some wiggle room in responding to supply shocks. The problem, as demonstrated above, is that in practice it rarely works. Responding to supply shocks in real time requires exceptional judgement and usually some luck. In fact, as I note in this policy paper, some scholars think that the successes of inflation targeting prior to the crisis were due largely to luck. There were simply fewer supply shocks during the early years of inflation targeting. Going forward, this seems less likely given the rapid productivity changes of an increasingly digitized world. So this problem is not going away and is likely to get bigger.

What is needed, then,  is an approach to monetary policy that does not get hung up on supply shocks. It would fully offsets demand shocks, ignore supply shocks, while still maintaining a long-run nominal anchor...if only  there were such an approach. Oh wait, there is such an approach and it is called nominal GDP targeting.
Posted by David Beckworth at 2:52 PM