Two years ago I was part of a panel discussion on Fed policy at the American Enterprise Institute. I talked about why money still matters as way to make the case that the economy was still being plagued by excess money demand. This problem occurs when desired money holdings exceed actual money holdings. This imbalance causes a rebalancing of portfolios toward safe assets away from riskier ones and in the process causes a decline in aggregate demand. This is one way to view the long slump.

My argument back then was that even though the excess money demand problem peaked in 2009 it still was being unwound in 2013 and therefore still a drag on the economy. Among other things, I showed as evidence a chart portraying the sharp rise in the share of household assets that were liquid and noted it was still elevated in 2013. You can see it in the video or slides from the panel, but I thought I would update the chart in this post to see how much progress we made on the excess money demand problem.

The figure  below shows the liquid share of household assets and plots it against the U6 unemployment rate. In both the 2001 and 2007-2007 recessions this measure leads unemployment. It appears there may still be some residual excess money demand, but a lot of progress has been made. The most striking observation for me, though, is how long it has taken for household portfolios to return to more normal levels of liquidity. It has taken six years and appears not completely done yet! Remember this the next time someone tells you that the aggregate demand shocks were all were worked out years ago. 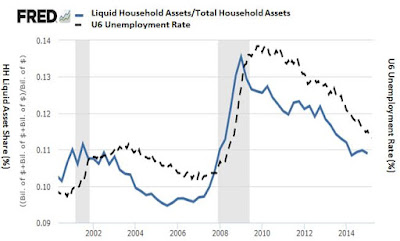 This next figure plots the household liquid share against small businesses concerns about sales. The latter measure comes from the following question in the NFIB's Small Business Economic Trends: "What is the single most important problem facing your firm?"  There are nine answers firms can chose, but below I plot just the one about concerns over lack of demand. Here too you see a good fit, a non-surprising result. 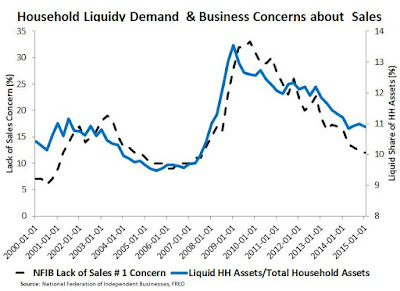 The fact that a large portion of the liquid share of household assets has declined over the past six years shows that its elevated rise was not a structural development but a cyclical one. It also suggests that more could have been done to hasten its return to normal levels. That is, more could have been done to satiate the excess demand for money. It should not take this long for a business cycle to unwind.

P.S. This is not to say there were no structural problems over the past six years. There were plenty. But what the above analysis speaks to is that many observers grossly underestimated the size and duration of the aggregate demand shock.


Update: I count cash, checking, saving, time, money market mutual funds, treasuries, and agencies as the liquid portion of household assets. Here is the link to the data in FRED.
Posted by David Beckworth at 12:22 PM