Who Predicted the Eurozone Crisis?

According to a recent Bloomberg article, nine people saw the Eurozone crisis coming years before anyone else. Wow, only nine people saw it coming? That is remarkable, these folks must be truly prescient if only they foresaw the crisis.

Except that this claim is terribly wrong. There were many economists who saw the problems of a European monetary union before it formed. One prominent economist not on the Bloomberg list is Martin Feldstein who wrote a famous 1997 Foreign Affairs article that began as follows;

Feldstein was one among many American economists who doubted a currency union in Europe would work. In fact, an entire article in Econ Journal Watch provides a survey of the skeptical tendencies of most American economists over the Euro prior to its inception. The authors, both Europeans, went on to claim these skeptical Americans had been proved wrong by history:

The main finding of our survey is that US academic economists were mostly skeptical of the single currency in the 1990s. By now, the euro has existed for more than a decade. The pessimistic forecasts and scenarios of the U.S. academic economists in the 1990s have not materialized. The euro is well established. It has not created political turmoil in Europe, and it has fostered integration of financial, labor and commodity markets within the euro area. Trade within the euro area has increased, and so has business cycle synchronization. Inflation differentials within the euro area are presently of the same order of magnitude as in the United States.

Why were U.S. economists so skeptical towards European monetary integration prior to the physical existence of the euro?

Ironically, the article was published in early 2010 just as the Eurozone crisis was unfolding. For our purposes the most interesting thing about this article is not its incredibly wrong Euro triumphalism, but its documentation of the many American economists who were skeptical of the Euro. The article looks at American economists in the 1990s both at the Federal Reserve and in academia. Below is the list of academics covered in this paper. 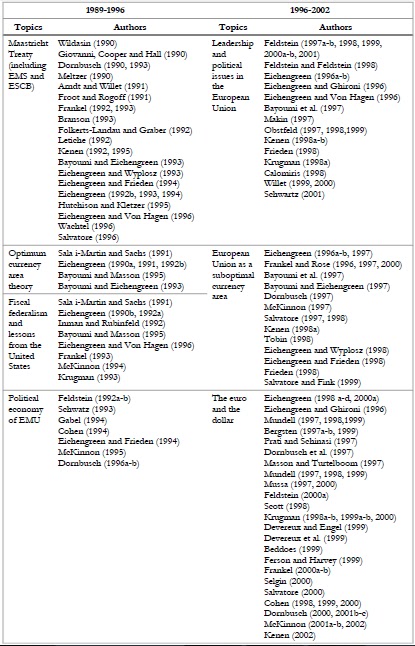 Add to this list another 43 surveyed from the Federal Reserve. So yes, there were a few more than nine people who expressed some level of doubt and worry about the viability of the Eurozone. So next time you hear someone touting the few who saw the Eurozone crisis coming, understand there were actually many who foresaw it.

Update: Presumably most of the UK residents who were against the Maastricht Treaty in 1992 did so because they understood the problems of a European currency union. After all, they had just gone through the Exchange Rate Mechanism crisis. So add these folks to the list of people who saw the Eurozone crisis coming.
Posted by David Beckworth at 1:34 AM