People's QE Has Been Tried Before and Failed

I am seeing more and more people get excited about "People's QE", the brainchild of UK labor party leader Jeremy Corbyn. For example, Roger Farmer sees it as similar in spirit to his own preferred approach, Ambrose Evans-Pritchard says "it is exactly what the world may soon need" and Matthew C. Klein argues "the core idea is sound and has an impressive intellectual pedigree." With endorsements from such thoughtful people, this QE must be something special. So what exactly is it?

The People's QE is a program where the Bank of England (BoE) would engage in large scale asset purchases of debt used to finance investment spending in infrastructure. The issuers of the debt would not be the central government, but local governments and other agencies in the UK that fund investment spending. One advantage of this approach, according to its advocates, is that it would be politically easier to implement since it would not explicitly create bigger budget deficits (even though implicitly it would be doing so). More importantly, supporters argue this form of QE would send the newly created money directly to people and institutions that actually spend the money. More bang for your  buck! So what could go wrong?

A lot, actually. For this approach is nothing more than a monetization of debt--a helicopter drop. It is widely recognized that helicopter drops will have no effect on aggregated demand if the monetary injections are perceived as temporary. And monetary injections will always be perceived as temporary without a credible commitment from the government to reflate the economy. In practical terms, this means a helicopter drop needs to be accompanied by a higher inflation target or a price (or NGDP) level target high enough to create some reflation. Otherwise, the helicopter drop will be all for naught. But don't take my word for it, ask Paul Krugman or the list of notable economists found here.

To  make this understanding concrete, let's imagine Jeremy Corbyn becomes Prime Minister and the BoE engages in People's QE with its current 2% inflation target. Investment spending would initially begin to grow, but quickly run up against the inflation target and force the BoE to either pull back on or start sterilizing its purchases. The UK economy might eke out a few more basis points of aggregate demand growth, but not the kind needed for full employment or envisioned by advocates of the People's QE. Contrary to claims of its advocates, then, QE would not pack more of a punch simply because the money went directly to infrastructure spending. No matter who spent the money, the economy would run up against the 2% inflation constraint. This is what I have called the Penske Problem.

The hugely under appreciated point here is credibility. As Paul Krugman noted in his 1998 paper, the government has to credibly commit to a permanent expansion of its liabilities, but that is very hard  to do because the resulting reflation will be seen as irresponsible by the public. Another way of saying this is that the BoE 2% inflation target is not just a central bank commitment, but a government commitment to low inflation. Until you can credibly commit to changing that via a higher inflation target or a level target a helicopter drop will not matter.

This is not just a theoretical story. People's QE has been tried before and failed miserably. Between 2001 and 2006 Japan conducted the original QE program while running large deficits, as can be seen in the figures below. 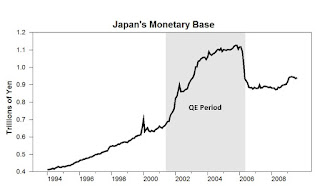 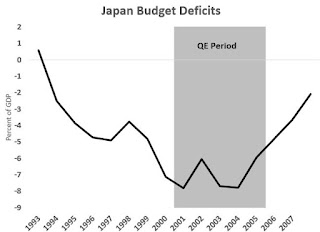 Japan, in other words, was engaged in helicopter drops just like the UK would be under the People's QE. As the figures above show, the monetary base increase was eventually reversed. And what did this do to aggregate demand growth in Japan? Not much: 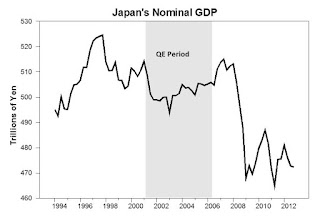 This notion that doing helicopter drops without any monetary regime change will make a meaningful difference is an economic zombie that needs to be laid to rest. If you want robust aggregate demand growth you have to reanchor your economy to either a higher inflation target or some kind of level target such as a NGDP level target. Otherwise, an economy will be spinning its wheels.
Posted by David Beckworth at 7:05 PM