1.  Inflation has consistently fallen below the Fed's two percent inflation target for the past seven years. Here is a visual representation of this this development in terms of a shooting target: 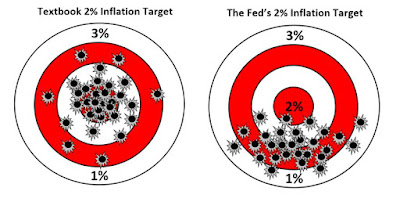 Yes, core PCE inflation has has averaged near 1.5% over the past seven years despite a 2% inflation target. It is as if someone has been doing target shooting and persistently hits the lower half of the target. Maybe the Fed is actually aiming for something other than 2%--possibly a 1%-2% inflation corridor target--or maybe the Fed in its current form is not as powerful as we thought. Either way, inflation is being systematically kept below 2%. This suggests relatively weak aggregate nominal spending growth. This is consistent with tight macroeconomic policy.

2. The risk-free real interest rate appears to still be cyclically adjusting. That is, the 10-year treasury interest rate adjusted for the risk premium appears to be following the prolong closing of the output gap. Some have confused the low levels of real interest rates as evidence for secular stagnation. As I have argued elsewhere, this need not be the case. The long decline in real interest that most observers invoke as the smoking gun for secular stagnation is misleading because it does not correct for the rise in the risk premium during the 1970s. Once one corrects for that you get the following figure: 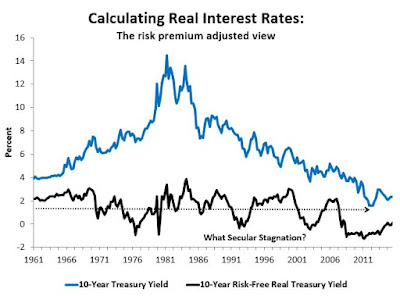 The black line is the 10-year risk-premium adjusted real treasury interest rate. Note that it averages just under 2%--roughly tracking the average growth rate of the economy--but deviates around that average. Since the 1980s, those deviations closely track the business cycle as seen below: 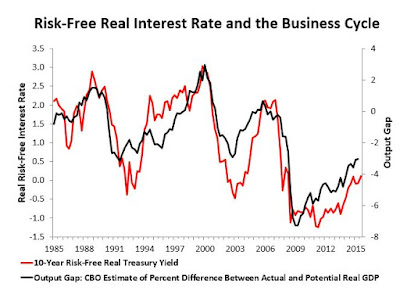 What this implies is that slow return of risk-free real rate to a higher level is simply a reflection of the slow unwinding of this business cycle. That it has taken this long to adjust only part way suggests that macroeconomic policy has not been very supportive.

3.  Household portfolios still inordinately weighted toward safe assets. If one looks at the holding of liquid assets by households--defined here as cash, checking, saving, time, money market mutual funds, treasuries, and agencies--as percent of total assets it shot up during the crisis and still has yet to return to pre-crisis levels.  This indicates household demand for safe assets remains slightly elevated. This can seen in the figure below. Note that this liquidity demand measure leads the broad unemployment rate. 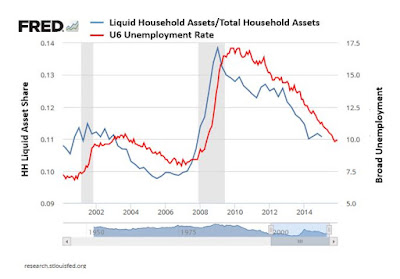 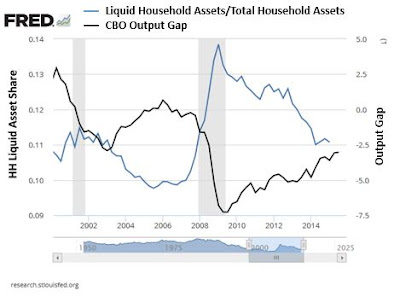 4.  Total dollar spending is still below its full employment level. This last bit of evidence is model-based and is part of a paper I am finishing where I estimate various ways to gauge the appropriate level of aggregate nominal expenditures. The key point here is that the sharp drop in nominal spending during the crisis never has been fully corrected for even after adjusting for changes in potential real GDP. It is hard to reconcile this with loose macroeconomic policy. 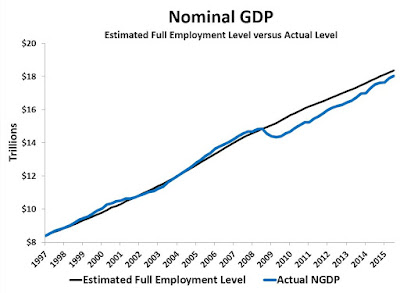 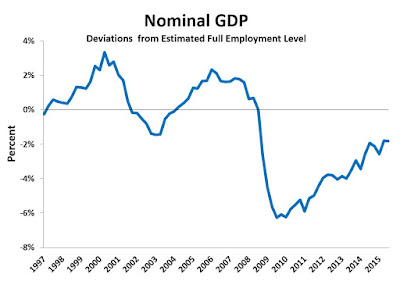 In short, macroeconomic policy has not been very supportive of a robust recovery over the past few years. So I agree with Narayana Kocherlakota on this point. Where people can reasonably disagree, I think, is whether this was the Fed's fault. Stephen Williamson, for example, sees little that the Fed could have done. For him, it was fiscal policy that was deficient. Specifically, he thinks there should have been more U.S. treasuries to alleviate the safe asset shortage problem.

My own view is that the bigger problem is the body politic's rigid commitment to low inflation. There is no way the Fed or Treasury could have spurred significantly more nominal spending growth without there being a temporary increase in the inflation rate. And that is simply intolerable in the current environment. The safe asset shortage problem and inability of the Fed to get much traction is simply a symptom of this problem.

That is one reason why I am a big advocate of NGDP level targeting. It would allow for temporary deviations in the inflation rate while still providing a credible long-run nominal anchor. Until we get something like this, expect regular bouts of macroeconomic policy being overly tight.
Posted by David Beckworth at 12:51 PM