Connecting the Dots: the Demand Side of Oil's Decline

Why have oil prices declined so sharply since mid-2014? For many observers the answer is obvious: there has been a surge in global oil production and it has pushed down oil prices. It is hard to argue oil supply has not been important, but the slowdown in emerging economies and in the United States also suggests that global demand is playing an important role too. If so, this understanding raises several questions: First, how much of the decline in oil prices since mid-2014 can be attributed to weakened global demand? Second, why did global demand begin falling in mid-2014?

On the first question, Stephen King of HSBC believes that weakened global demand is a key reason for the recent decline in oil prices. Here is what he said to CNBC:

"You have a situation where emerging markets in general are extremely weak, that in turn is causing commodity prices to decline rapidly, including oil prices, so rather than saying lower oil prices are a stimulus for the commodity consuming parts of the world, I think you should see lower oil prices as a symptom of weakness in global demand,"

Jens Pedersen, an economist with Danske Bank, shares this view and provides following figure as evidence:

This figure is certainly suggestive of a link between global demand and oil prices, but exactly how much does this link explain?

Ben Bernanke had a recent post that attempted to answer this question. In it, he presented evidence from an estimated model for the demand of oil. The model builds upon the work of James Hamilton who estimated a regression where the demand for oil is determined by changes in copper prices, the 10-year treasury yield, and the dollar. Here is Bernanke's explanation for why this model approximates the demand for oil:

The premise is that commodity prices, long-term interest rates, and the dollar are likely to respond to investors’ perceptions of global and US demand, and not so much to changes in oil supply. For example, when a change in the price of oil is accompanied by a similar change in the price of copper, this method concludes that both are responding primarily to a common global demand factor. While this decomposition is not perfect, it seems reasonable to a first approximation.

Using this approach, both Bernanke and Hamilton find that 40%-45% of the decline in oil prices since mid-2014 can be attributed to weakening global demand. I reestimated their model, but added the BAA minus the 10-year treasury spread as another indicator of demand conditions. The idea behind its use is that weakening demand increases the credit risk of firms and therefore causes this spread to rise. Using this specification of the model, I was able to attribute 51% of decline in oil prices to weakening global demand. This can be seen in the figure below: 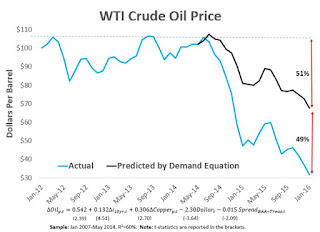 My estimates, which are similar to Bernanke's and Hamilton's, suggest that about half of the decline in oil prices since mid-2014 is due to weakening global demand. So yes, global demand does seem to be an important part of story behind the descent of oil prices.

As an aside, these results help shed some light on a puzzle with "breakevens"-- the spread between nominal treasury yields and real treasury yields from TIPs. Breakevens are supposed to capture the bond market's view of inflation (though it is sullied a bit by a liquidity premium for TIPS). Many observers have often noticed that these breakevens track oil prices and therefore conclude that either oil prices are driving inflation or that the breakevens really do not tell us much about expected inflation.

I have always had a problem with this understanding. It ignores the possibility that something else might be driving both breakevens and oil prices. Moreover, breakevens also tracks the BAA-treasury spread mentioned above.

It always seemed to me that breakevens, oil prices, and the credit spreads may be responding in part to something else. The results above suggest that the something else is global demand.

Anyways, this still leaves us with the second question: why did global demand and therefore oil prices began to tank starting around mid-2014? Readers of this blog should already know my answer. Beginning in mid-2014 the Fed started talking up interest rate hikes and continued to do so through 2015. This signalling that future monetary policy would be tightened got priced into the market and affected decisions well before the December 2015 rate hike.

The talking up of interest rate hikes, therefore, amounted to an effective tightening of monetary policy for the United States and all the countries that peg their currency to the dollar.It explains the sharp rise of the dollar as shown below: 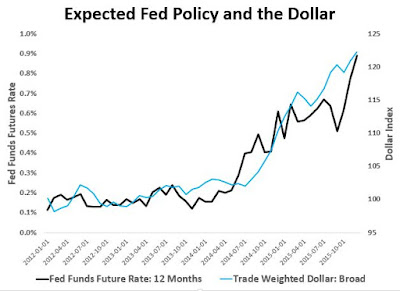 This tightening of monetary policy got ahead of the U.S. recovery and precipitated a slowdown in U.S. economic activity as I document here. It also put the noose around China's neck--who pegs to the dollar--as I show here. It is no surprise then that the oil prices began their dramatic fall after mid-2014. 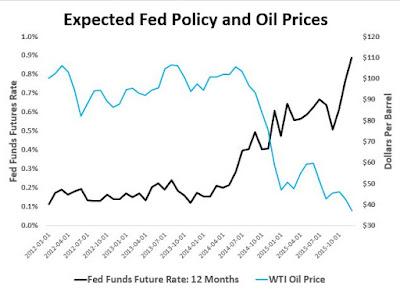 There is a rich irony to all of this. One of the reasons Fed officials talked up interest rate hikes is because they believed inflation was about to take off. They believed the only thing preventing it from happening sooner was the low oil prices which they saw as transitory. What they missed is that their own actions were a key reason for the decline in oil prices in the first place. Fed officials failed to connect the dots between talking up interest rate hikes, weakening global demand, and low oil prices. More and more, it seems Fed made a huge mistake in 2014-2015