The Brexit vote is upon us and most polls show a race that is too close to call. Much ink has been spilled debating this historic vote as well as trying to explain why it emerged in the first place. Most of the analysis on the latter point has been good, but I do think there is something that has been missing in these discussions. And that is the role the ECB's monetary policy played in helping bring about this referendum on Great Britain's future in the European Union (EU).
Most discussions on the causes of the Brexit vote point to concerns over immigration, burdensome EU regulations, and a general desire for more British sovereignty. These issues are important and confirmed by polling, but I see them as a proximate cause rather than the ultimate reason for the Brexit referendum. For, as The Economist notes, the UK has always been a "semi-detached member of the EU" and never has fully bought into it. This tendency was seen way back in the 1950s when the UK was reluctant to negotiate with the precursor to the EU. It was also evident in its decision to hold onto its own currency when the Euro was introduced in 1999.

So why has this natural British skepticism toward the EU only now risen to the point of a Brexit vote? I submit that this timing is the consequence of the tragic policy mistakes by the ECB that culminated in the Eurozone crisis. Recall that the ECB signaled and followed through with monetary policy tightening in 2008 and 2011. As I show in a new working paper, it was this tightening by the ECB that sparked the sovereign debt crisis, strained inter-European creditor-debtor relationships, and gave teeth to fiscal austerity. Had the ECB instead eased in 2008 and 2011 and began QE sooner, the Eurozone recession would have been much milder and the recovery more brisk.

There is evidence supporting this view. The Pew Research Center conducted a multi-nation survey this month on how Europeans view the EU. Below is a chart from this report that summarizes what they found: increasing skepticism towards EU from most countries surveyed. The rise in this EU skepticism coincides with the Eurozone crisis. 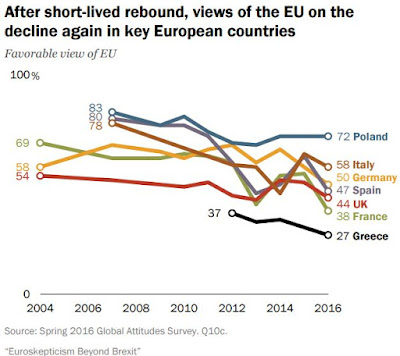 While the above chart maps the overall favorability scores of the EU, another question in the survey (50a) more narrowly asks whether the respondents approved or disapproved of the EU's handling of economic issues. In the figure below I plotted the disapproval rate for each country found in this question against their output gap (as measured by the OECD). 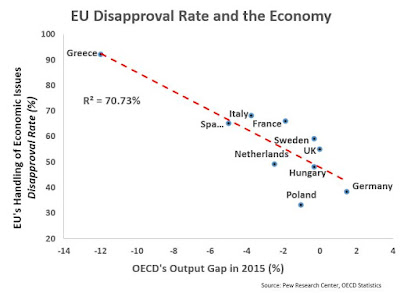 Since the output gap is economic slack induced by the business cycle, the clear implication is that better macroeconomic policy would lead to a more favorable view of the EU. And, again, the biggest failure of macroeconomic policy has been the ECB's policy mistakes in 2008 and 2011 for which the Eurozone is still suffering today.

So the Brexit vote can, in part, be laid at the feet of ECB policy makers in 2008 and 2011. These mistakes led to the Eurozone crisis which greatly accelerated the distrust of the EU and intensified concerns over immigration. Add this to the existing British skepticism toward the EU and the Brexit vote becomes a reality.

Now one could argue that these ECB's policy mistakes were the inevitable outcome of a poorly-designed currency union. The Eurozone was never an optimal currency area and therefore a one-size-fits all monetary policy applied to very different economies in Europe was going to end badly at some point in time. Maybe so, but as I argue in my working paper the ECB's mistakes of 2008 and 2011 were not inevitable. They were the result of the ECB overreacting to temporary inflation surges that should have been ignored. Until we better appreciate the ECB's errors of that time, we have failed to learn from the mistakes of the past.

Update: Now the Brexit is a reality, let me share my immediate concern with it: the further strengthening of the dollar. The global economy is already weighed down by the rise of the dollar that started in mid-2014. This is because (1) a sizable share of the global economy has their currency tied in some form to the dollar and (2) there has been a surge in dollar debt outside the United States.  As I said on twitter, the strong dollar noose that is choking emerging economies has now had the trap door released via Brexit to make the strangulation of global economy complete. Strap yourself in for a very bumpy ride.

Related Links
The Monetary Policy Origins of the Eurozone Crisis
Posted by David Beckworth at 11:05 PM