Nominal Demand Ain't What It Used to Be

Nominal demand is a shadow of its former self. In the past, it averaged near 5% annual growth but has struggled ever since the crisis. The figures below illustrate this on a per capita basis for aggregate demand and domestic demand growth. 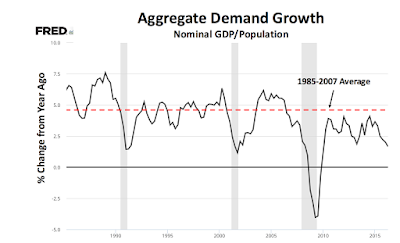 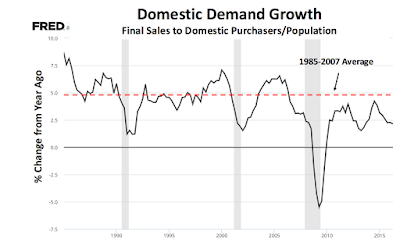 That, however, is not my point here. My point is that somehow policy makers were able to generate near 5% nominal demand growth per person pre-2008 and now seem completely unable to do so. Why?

My answer is that inflation targeting, as it is currently practiced, has become the poisoned chalice of macroeconomic policy.

Put differently, nominal demand growth has been weak because the Fed's past successes now prevent it and Congress from allowing the economy to temporarily run a little hot. This shortcoming is a big deal.

Seven years after the crisis this shortcoming still seems to be a problem. Even if we are closer to full employment, the inflation targeting straightjacket is still keeping nominal demand growth weak. This is unfortunate, especially if potential GDP has been affected by the sustained shortfall in nominal demand growth.

What is needed, then, is a monetary policy rule that anchors long-term price stability but provides for short-run price flexibility. Enter NGDP level targeting. It does all the above and then some.

Some of us have been making this argument for years. So it was nice to see this letter from San Francisco Fed President John Williams yesterday:

[C]entral banks and governments should critically reassess the efficacy of their current approaches and carefully consider redesigning economic policy strategies to better cope with a low r-star environment...

Turning to policies that can help stabilize the economy during a downturn, countercyclical fiscal policy should be our equivalent of a first responder to recessions, working hand-in-hand with monetary policy... One solution to this problem is to design stronger, more predictable, systematic adjustments of fiscal policy that support the economy during recessions and recoveries (Williams 2009, Elmendorf 2011, 2016)...

Finally, monetary policy frameworks should be critically reevaluated to identify potential improvements in the context of a low r-star... inflation targeting could be replaced by a flexible price-level or nominal GDP targeting framework, where the central bank targets a steadily growing level of prices or nominal GDP, rather than the rate...

John Williams is exactly right. NGDP level targeting is a great solution to the nominal demand shortfall and it can be implemented in a way that systematically utilizes both monetary and fiscal policy. This is done by having the Fed adopt a NGDP level target that is backstopped by the U.S. Treasury Department. It would be a rules-based way to use the power of the consolidated balance sheet of the U.S. government. Let's make nominal demand great again!

P.S. Here is the Chuck Norris and Jean-Claude Van Damme version of my NGDPLT proposal.
Posted by David Beckworth at 12:11 PM