The Bank of Japan: Monetary Mastery or Quantitative Quagmire?

The New Abenomics Program
The Bank of Japan (BoJ) just launched a new phase in its monetary easing program popularly known as Abenomics. It is doing so in the hopes of shoring up economic growth. This monetary program until today had involved a targeted expansion of the monetary base at ¥80 trillion a year matched by ¥80 trillion in government bond acquisitions. There were also targeted purchases of ETFs and REITs on a smaller scale.1

The new phase unveiled today consist of three key developments. First, the BoJ will target the 10-year government bond interest rate at zero percent. Second, it will aim to overshoot its 2% inflation target so that it is truly symmetric. Third, it will drop its quantity target for the monetary base and simply make its expansion conditional on the inflation overshoot. Everything else in Abenomics remains roughly the same.

So has the Bank of Japan finally mastered its monetary conditions in a way that will spur economic growth? Or is this just another step into the quantitative quagmire of Abenomics? The short answer: do not get your hopes up. There are two reasons why this probably will not make much difference. 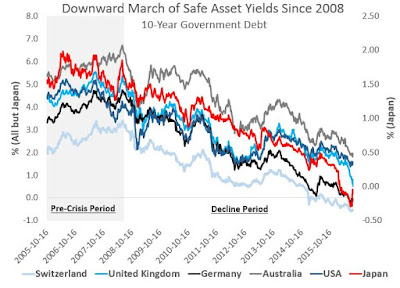 Over the past eight years, this downward march of yields has occurred before, during, and after various QE programs. So while it is true that the BoJ has been the marginal buyer of Japanese government bonds over the last year, its actions are only doing what the global bond market was already doing and would have continued to do in the absence of BoJ actions. Put differently, the market-clearing or 'natural' interest rate that is based on fundamentals has been falling for some time and is already very low. The BoJ's new long-term interest rate target simply is a recognition of this fact. So there really is nothing new here.

Second, there is a serious credibility issue when it comes to the expansion of the Japan's monetary base. As seen in the figure below, the monetary base has seen a three-fold increase in its size since the beginning of Abenomics. If this expansion were truly permanent, then the price level would also increase threefold over the long-run. There is no way that can happen. The population is aging and depends increasingly on fixed income. Inflation for them is a non-starter. There is no political economy support for such a radical change in the price level. 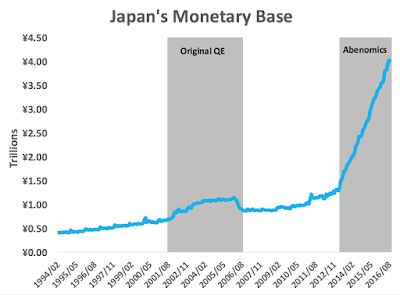 Here is why this matters: some  portion of the monetary base injection (above that needed for normal money demand growth) needs to be viewed as permanent in order for spending and inflation to rise. If monetary injections are expected to be temporary they would do little to spur spending. If they are viewed as permanent, however, they would raise the expected future price level and thus temporarily push up expected inflation. The higher expected inflation, in turn, would spur robust spending in the present. But this requires some portion of the monetary base growth to be seen as permanent.

The problem, though, is that the expansion of the monetary base has been so large there is no way this growth can be seen a permanent for fear of excessive inflation taking off. The BoJ wants 2% inflation with some overshoot. If the threefold increase of the monetary base were made permanent, the BoJ would get 300% inflation with overshoot! Put differently, the massive expansion of the BoJ's balance sheet undermines its very goal of raising nominal spending and inflation.

So making the growth of monetary base conditional on inflation hitting its target is not credible. The monetary base is simply too large for the BoJ to get any traction this way.

So Does Abenomics Matter?

With all that said, Abenomics has been able to spur some aggregate demand growth and some inflation. Just nowhere near where the government wants it to be.  Below is a figure that shows the level of nominal spending (as measured by nominal GDP) for Japan.  Nominal spending has grown under Abenomics, far more than under the origional QE program of 2001-2006: 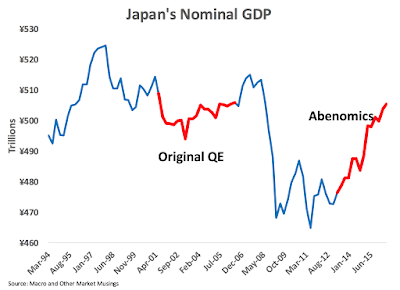 I used to think this moderate success was because the monetary base expansion under Abenomics was permanent. But now that the monetary base has gotten so large, I am doubtful for the reasons laid out above. So Abenomics has been moderately successful, but it is not entirely clear to me why this is happening.

It is worth noting one of the goals of Prime Minister Shinzo Abe's government is to raise nominal GDP to ¥600 trillion by 2020. Yes, Japan has a NGDP level target. The Prime Minister first called for this goal in September 2015 and spoke to it again in December 2015.  Since then, it has been in the government's economic and fiscal projections For example, here is the July 2016 executive summary of the projections. The nominal GDP goal stated near the top of the document.

When the goal was first introduced, it was an ambitious 20% growth  goal for Japan's nominal GDP. It is now closer to 17% given the growth of nominal GDP since then, but this still remains a very ambitious goal as seen in the figure below. This figure shows different paths towards the ¥600 trillion by 2020. 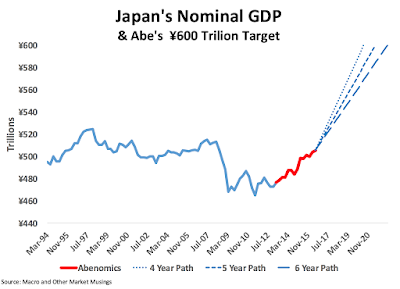 All of these paths seem ambitious given the recent growth rate of nominal GDP in Japan. It is not clear how to get there without having a major overshoot of inflation.  Maybe the BoJ could reiterate the governments nominal GDP level target and try to communicate that some small portion of the monetary base will be permanent and that it will be injected via purchases of perpetual government bonds. Admittedly, this would be a tough message to communicate. But it is not clear what alternatives there are for Japan.

So to answer the question in the title to this post, I suspect Japan may be heading further into a quantitative quagmire rather than mastering its monetary conditions.

P.S. Yes, the markets seem happy about this development so far. But they also seemed happy about the ECB's added stimulus in March 2016. That euphoria did not last and neither will this reaction to the BoJ.