Paul Krugman joined me for the latest Macro Musings podcast. It was a fun show and we covered a lot of ground from liquidity traps to secular stagnation to fighting the last war over inflation. Paul and I have had conversations in the blogosphere since the 2008 crisis so it was real treat to finally chat with him in person.

In our conversation there were two issues brought up that deserved more time, in my view, than we could give on the show. So I want to address them in this post.


The first one is the important distinction between temporary and permanent monetary base injections. This distinction came up up in our discussion on what it takes to reflate an economy in a zero lower bound (ZLB) environment. Krugman's 1998 paper showed that to do so requires a permanent increase in the monetary base whereas a temporary one will not work. This 'irrelevance result' was further developed by Eggertson and Woodford (2003) who showed that QE programs that are temporary in nature will not spur rapid aggregate demand growth. Others have since built upon this point and there is also earlier monetarist literature that makes a similar argument (source). Here is an excerpt from a Michael Woodford FT piece in 2011 that nicely summarizes this view1:

The economic theory behind QE has always been flimsy. The original argument, essentially, was that the absolute level of prices in an economy is determined only by a central bank's supply of base money. Because of this, at least in the long run, any increase in supply must raise prices proportionally. It followed that, in the short run, QE must also have an effect on spending levels, that will eventually tend to raise prices, even if the channels by which this occurs are obscure.

The problem is that, for this theory to apply, there must be a permanent increase in the monetary base. Yet after the Bank of Japan's experiment with QE, the added reserves were all rapidly withdrawn in early 2006. More worryingly for Mr Bernanke, whatever the long-run effects would have been, there was no increase in nominal growth over the five years of the experiment.

The Fed has given no indication that the current huge increases in US bank reserves will be permanent. It has also promised not to allow inflation to rise above its normal target level. So for QE to be effective the Fed would have to promise both to make these reserves permanent and also to allow the temporary increase in inflation that would be required to permanently raise the price level in that proportion.

Woodford acknowledges the Fed's large scale assets purchases can help when financial markets freeze up like during QE1, but beyond that will not create the kind of robust aggregate demand growth required to quickly escape a ZLB environment.

For me, the implication of this understanding is that the Fed should have aimed to return the price level (or nominal income) to its previously-expected growth path following the crisis. Krugman, on the other hand, is worried that might not be enough if secular stagnation is real. He, consequentially, prefers a permanently higher inflation rate whereas my approach would imply only a temporary one. In short, I want a level target for monetary policy whereas Krugman wants a higher inflation target.

As Gary Gorton and others have shown, there was a bank run on these institutional money assets during the financial crisis that led to a sizable and persistent reduction in their supply. This can be seen in the figure below which uses the M4 component data from the CFS: 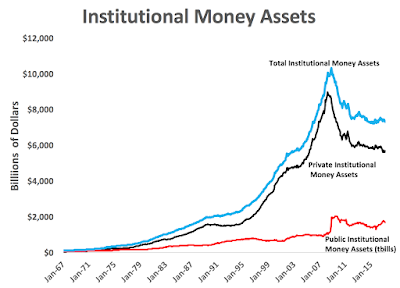 This persistent shortfall in the privately-produced institutional money assets seen above was partially offset by the rise in treasury bills.  More of the shortfall could, in theory, be offset by the issuance of additional treasury bills. That was the point I was trying to make. The big question here is could the U.S. Treasury issue enough treasury bills to fill the institutional money asset shortfall without jeopardizing its risk-free status? I do not know. But it is one possible solution to the safe asset shortage problem.

The chart below builds upon the last figure by plotting the institutional money assets along side the retail money assets (or M2). Together they make up the M4 money supply. The figure reveals that even though the M4 money supply is now past its pre-crisis peak, is still far below its pre-crisis trend path. It never has fully recovered from the Great Recession. This could be part of the story for the weak recovery and, arguably, treasury could help. 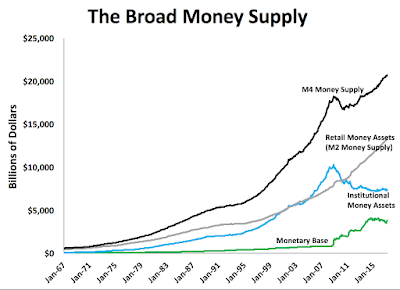 1 The Michael Woodford article ran in the Financial Times on August 26 and was titled "Bernanke Should Clarify Policy and Shrink QE3"
Posted by David Beckworth at 11:34 PM