Mark Thoma points us to an interesting article by Simon Johnson and Jonathan Ostryon of the IMF on global economic imbalances. Simon and Jonathon note the following:

The US dollar has depreciated in a way that helps global adjustment and fortunately does not disrupt the US government securities market; long-term rates are in fact down from July, so adjustment has been "orderly."
However, all is not well in the rest of the world.
[T]he pattern of exchange-rate movements in the rest of the world has been largely unrelated to existing current-account positions. In fact, currencies of surplus countries with heavily managed exchange rates have actually depreciated in real effective terms since the summer, creating inflationary pressure and frustrating global adjustment.
This has also shifted the burden of adjustment disproportionately onto countries with floating currencies, such as the euro and the Canadian and Australian dollar. The lack of adjustment of surplus countries with inflexible exchange rate-regimes means that as the US deficit falls, a counterbalancing deficit develops elsewhere in the world -- along with real effective exchange rate appreciation.
So in spite of the recent appreciation of the Chinese Renminbi against the dollar and the related (slight) improvement in the U.S. trade balance, the global economic imbalances tied to this part of the world are just being gradually shifted to Europe et al. as seen through their trade balances and exchange rates. And then there are the on-going current account surpluses coming out of oil exporting countries. The world, then, is still largely imbalanced, but just in a slightly different way. This story is not really new if you have been reading Brad Sester, but it drives home the point.
Here is a graph (click here for larger file) that illustrates this reality:

This figure pulled from the ECB web site shows the number of Renminbi per Euro since late 2005. The upward trend in the value of the Euro relative to the Renminbi is clear.

Below is another figure illustrating this shift of imbalances from the U.S. to the Europe. This figure shows each region's current account balance as a percent of world GDP. The data comes from the IMF and the data for 2007 is an estimate (including my own adjustments). So the last data point should be viewed with caution. Nonetheless, this picture indicates global imblances are far from being unwound. 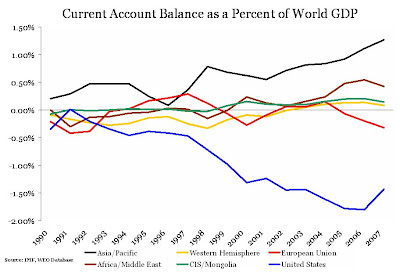 Posted by David Beckworth at 6:37 PM