Lessons Learned from the Greenspan Era

The Financial Times has an editorial comment looking at the lessons learned from the Greenspan era. I have posted the piece below with my comments in brackets.

Learning from the Greenspan Legacy

The subprime crisis is Alan Greenspan’s fault, or so we are increasingly told: he offered bankers too much monetary candy and should have put them on a monetary diet instead. Is this criticism justified? And what does it imply for the future behaviour of central banks?

Few now have as much confidence in the self-restraint of the financial children as Mr Greenspan was wont to. No less certainly, Mr Greenspan’s reputation is sinking. Once hailed as a maestro, he is condemned by many as profligate. The truth is more complex. He was never the genius he was held to be. Nor is he the dunce some now allege. He was merely fallible. As such, he made good and bad calls.

Four features of the global economy – low inflation, the global “savings glut”, globalisation and the US productivity upsurge – have made managing monetary policy seductively difficult. It was difficult because the combination of low interest rates with fast economic growth proved the breeding ground for a succession of asset bubbles, most recently in housing. It was seductive because the bubbles were so popular, at least at the time.

[I concur--rapid real economic growth fueled by productivity gains and accompanied by historically low real interest rates is a Wicksellian no-no. The Fed cannot push the actual real interest rate below the neutral one and expect all will be well. Below is a graph from an earlier post that illustrates these developments (see here for larger picture).] 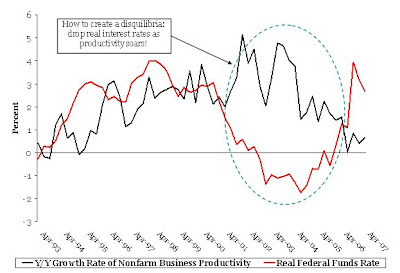 Even if one grants the difficulty, the US Federal Reserve might have erred: its monetary policy might have been too loose after 2000, particularly when its target interest rate sank to 1 per cent in 2003; it might also have remained loose for too long; it might have been asymmetric, with more attention being paid to downside than upside risks; and it might have paid too little attention to asset prices. Furthermore, under Mr Greenspan, the Fed might have assumed too readily that the financial system was self-policing.

Of these charges, the first is least plausible. After the stock market bubble burst, the case for insurance against deflation was overwhelming. But the argument that policy was loose for rather too long looks convincing, in hindsight. The asymmetric response to asset price movements is also, alas, compelling: in practice, the Fed has responded to asset price declines with greater urgency than to rises.

[Regarding the first charge, the case against deflation was not overwhelming. As suggested by the above figure and as I have made clear elsewhere, there is enough evidence to doubt the deflationary pressures of 2003 were of a malign nature. Rather, it is more reasonable to conclude they were the product of rapid productivity gains. I will concede the evidence is mixed for 2002, but by 2003 the deflationary pressures appear to have been largely benign. The Fed simply misread the deflationary tea leaves in 2003 and thus set a monetary policy in play that was distortionary. A few observers recognized this possibility of misreading the deflatoinary pressures back then and the potential consequences that could follow. Others are now vindicating this view.]

Yet the last charges seem the most important. The Fed’s view is that central bankers should respond to asset price bubbles only after they burst. But the bursting of a bubble associated with a credit surge is almost always highly destabilising. Taking at least some preventive action surely makes sense. Finally, the view that financial markets are self-policing is, alas, rather less credible than it was. A year can be a long time in economic policy.

[George Selgin has suggested a monetary policy rule that would address some of these problems. It is a nominal income targeting rule that would allow productivity movements to be more readily reflected in the price level. Selgin calls this the 'Productivity Norm' rule. See here for more about this rule or check out his book "Less than Zero."]
So central bankers have to learn lessons. Yes, the bankers were responsible for bingeing on the cheap money provided. But central banks bear responsibility for providing the feast and need to be more frugal in future. So Ben Bernanke, the Fed chairman, should take note. Using a new supply of candy to cure indigestion might cause even sharper pains tomorrow.
Posted by David Beckworth at 9:15 AM