The Opiate of the Elite or Simply the Income Effect Dominating?

Andrew Gelman et al. have a article over at Vox EU titled "Opiate of the Elites." These authors show that, contrary to conventional wisdom, religion is not the opiate of the poor masses, but of those with higher incomes or the elites. They find that being religious increases the probability of someone voting based on moral and cultural concerns if that person is in a higher income group. Being religious and in a lower income group reduces the probability. Here is one of their graphs that captures this relationship in terms of who voted for GW Bush: 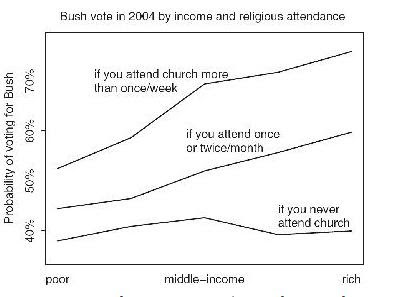 The authors conclude that "income predicts how you vote—if you are religious." They explain this finding by appealing to a view of "post-materialism—the idea that, as people and societies get richer, their concerns shift from mundane bread-and-butter issues to cultural and spiritual concerns." Stated differently, "economic concerns are more important in poorer areas, with social and religious issues mattering more among the rich."

If one assumes that voting for moral and cultural reasons also implies other time commitments to these issues (staying informed by reading and watching TV, discussing issues with friends, supporting rallies, etc.), then these results could also be interpreted by using what economic theory tell us about the labor-leisure choice via the substitution and income effects. For those individuals in the lower income group, it is likely that the substitution effect--which says the opportunity costs of social activism, forgone earnings, is too high--dominates. Their time is better spent working than worrying about social issues. On the other hand, those individuals in higher income groups most likely have the income effect--which says they can afford leisure activities like social activism--dominate. Simply, as individuals become richer they can afford to become more engaged in these social issues, if that is what they want.

This is a theme I touch on in my own research that looks at the relationship between the business cycle and religiosity. I find that mainline Protestant denominations--which tend to have higher income earners--do well in terms of growth during economic booms while evangelical Protestants denominations--which tend to have lower income earners--actually struggle. (During economic downturns the outcomes are reversed--evangelicals Protestant denominations thrive.) In general, I find mainline Protestants to have a strong procyclical component to their religiosity while evangelicals have a strong countercyclical component. These findings can be explained by again appealing to the labor-leisure choice explained by economic theory.

So, in short, the fascinating findings of Gelman et al., then, can be explained using standard economic theory.

Update: Andrew Gelman responds here and I provide some clarification here.
Posted by David Beckworth at 8:33 AM