This week we learn what happened to the U.S. economy in 2007:Q1. The folks at Real Time Economics argue the numbers do not add up for an outright Q1 contraction. This conclusion is supported by the coincident indicator from the Philadelphia Fed which grew on an annualized basis about 1% in Q1. Below is the same coincident indicator over Q1 plotted for the 50 states: 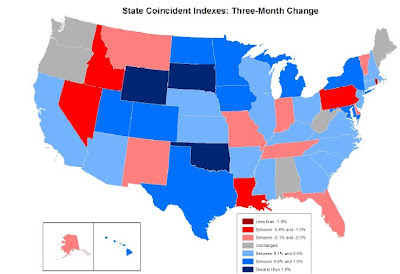 In words, "for the past three months, the indexes increased in 31 states, decreased in 14, and were unchanged in the other five." Not bad, but wait... things look different over the last month, March: "The indexes increased in only 19 states for the month, decreased in 22, and were unchanged in the remaining nine..."(Source). So even though we may have escaped negative growth in Q1, economic conditions may be getting worse going forward if March is any indicator of things to come. This is consistent with what famed investor Mohamed El-Erian thinks as well as those observers who believe we are only 1/3 of the way through a $1 trillion dollar loss. Hang in there America.
Posted by David Beckworth at 11:01 PM