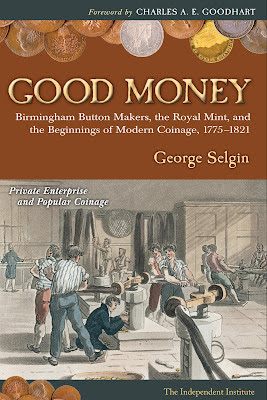 This is a book that has policy implications for central banks today. From the publisher:

In Good Money, George Selgin tells the story of a fascinating and important yet almost unknown episode in the history of money—British manufacturers’ challenge to the Crown’s monopoly on coinage.

In the 1780s, when the Industrial Revolution was gathering momentum, the Royal Mint failed to produce enough small-denomination coinage for factory owners to pay their workers. As the currency shortage threatened to derail industrial progress, manufacturers began to mint custom-made coins, called “tradesman’s tokens.” Rapidly gaining wide acceptance, these tokens served as the nation’s most popular currency for wages and retail sales until 1821, when the Crown outlawed all moneys except its own.

Good Money not only examines the crucial role of private coinage in fueling Great Britain’s Industrial Revolution, but it also challenges beliefs upon which all modern government-currency monopolies rest. It thereby sheds light on contemporary private-sector alternatives to government-issued money, such as digital monies, cash cards, electronic funds transfer, and (outside of the United States) spontaneous “dollarization.”

Read more about the book here.
Posted by David Beckworth at 8:32 AM

Email ThisBlogThis!Share to TwitterShare to FacebookShare to Pinterest
Labels: Books