Where People Are Moving

I came across this interesting report by Mark J. Perry of the U.S. Census Bureau on domestic net migration in the United States for the years 2000-2004. There were no surprises in the report, but rather a continuation of migration patterns from earlier years. From the summary:

Domestic migration continues to redistribute the country’s population. The longstanding pattern of net outmigration from the Northeast and the Midwest and net inmigrationto the South and the West continued between 2000 and 2004 with modest change from the regional patterns in the 1990s.

So my move from Michigan to Texas last summer was not exceptional, just part of a long-term trend. Still, it interesting to put my personal experience into the context of larger migration patterns in the United States.

Below are some of the interesting images from the report (click on images to enlarge): 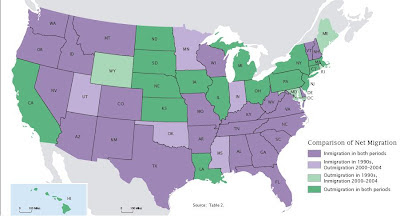 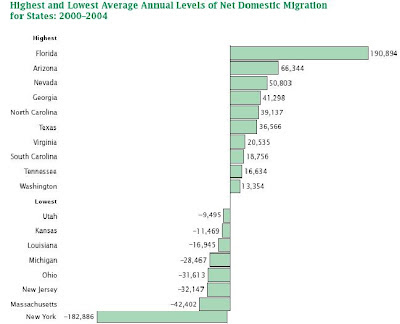