and not fiscal policy, according to Christina Romer in her 1992 JEH paper. Tyler Cowen recently referenced this article--amidst the New Deal debate ragging between Alex Tabarrok, Eric Rauchway, Paul Krugman, and others--and I want to follow up by noting a few more details from its conclusions. First, Romer found that fiscal policy was inconsequential not only in the early -to-mid-1930s, but also as late as 1942. Her results call into question the traditional view that World War II-driven fiscal policy ended the Great Depression. Second, Romer shows that it was monetary developments that ended the Great Depression, both in the mid- and late-1930s. In her own words:

The money supply grew rapidly in the mid- and late 1930s because of a huge unsterilized gold inflow to the United States. Although the later gold inflow was mainly due to political developments in Europe, the largest inflow occurred immediately following the revaluation of gold mandated by the Roosevelt administration in 1934. Thus, the gold inflow was due partly to historical accident and partly to policy. The decision to let the gold inflow swell the U.S. money supply was also, at least in part, an independent policy choice. The Roosevelt administration chose not to sterilize the gold inflow because it hoped that an increase in the monetary gold stock would stimulate the depressed economy.(p. 781)

To make these findings more concrete, Romer performed some counterfactuals to demonstrate what would have happened had there not been expansionary macroeconomic policies. She does this by showing the actual path of real GNP and its path under non-expansionary policies. The difference between the two series show the importance of the expansionary policy that took place during this time. First she shows the impact of fiscal policy: 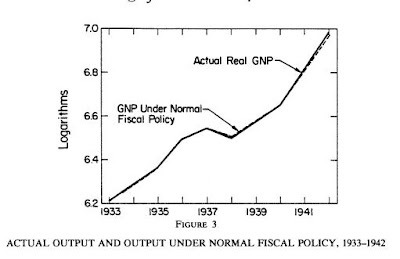 Note there is no meaningful difference between these series. Hence, there was no real expansionary fiscal policy, even as late as 1942. Next, she shows the effect of monetary policy: 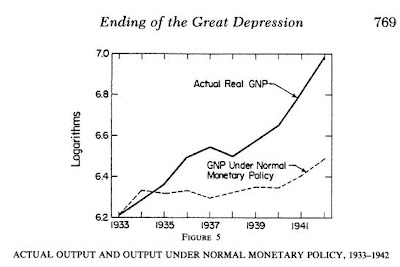 Here there is a significant difference. Romer concludes "real GNP would have been approximately 25 percent lower in 1937 and nearly 50 percent lower in 1942 than it actually was if the money supply had continued to grow at its historical average."

So much for the World War II story. But wait, Romer does notes that World War II can still be credited in a different way for ending the Great Depression:

However, Bloomfield's and Friedman and Schwartz's analyses suggested that the U.S. money supply rose dramatically after war was declared in Europe because capital flight from countries involved in the conflict swelled the U.S. gold inflow. In this way, the war may have aided the recovery after 1938 by causing the U.S. money supply to grow rapidly. Thus, World War II may indeed have helped to end the Great Depression in the United States, but its expansionary benefits worked initially through monetary developments rather than through fiscal policy.

Once again we are reminded that monetary policy matters.

Update: To be clear, Romer does not say fiscal policy could not be effective only that it was not really tried. See Mark Thoma for more on this point.

Posted by David Beckworth at 12:00 PM