Recently, a number of concerned observers took note of the rising cost of corporate borrowing by looking at real interest rates on AAA-rated and BAA-rated bonds. Let me add to their concern by looking at the BAA yield minus AAA yield spread. Whenever the spread between these two securities increases the market believes there to be a higher probability of default for the riskier BAA rated bonds. The spread may also increase as a result of the BAA securities becoming less liquid, either as a result of their increased riskiness or because of stress in financial markets. Since there are a large number of firms in these measures, the spread provides a good indicator of economy-wide stress facing firms. The spread, therefore, provide some insights into the overall state of the economy. The figure below graphs the spread and the officially dated NBER recession with gray bars. The data comes from the St. Louis Fed, has a monthly frequency, and runs through 11/24/08. (click on figure to enlarge.) 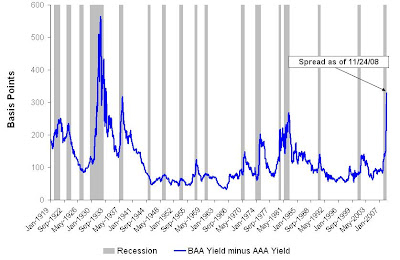 The figure shows that spread is now notably higher than it was during the 1973-1975 and early 1980s recessions. Moreover, the spread indicates corporate borrowing is now as stressed as it was during the second half of the Great Depression. So what does this mean for the real economy? To answer that question I took spread data for the entire period and plugged it along with the Fed's monthly industrial production series (also from St. Louis Fed) into a Vector Autoregression (VAR) with 13 lags (enough to eliminate serial correlation). Using the estimates from this simple VAR I was able to do a dynamic forecast of industrial production through the end of 2009. The figure below shows the results of this exercise. The blue portion of the line is the actual series while the red line is the forecast. (click on figure to enlarge.) 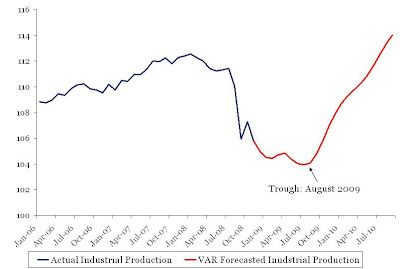 This simple bivariate model indicates the recession will last through August 2009. This implies that if the recession began in January 2008, then it should be a 20 month recession overall. This forecast assumes, though, the spread reaches a peak this month. If this assumption proves to be incorrect then the trough would be pushed back to a later date.
Posted by David Beckworth at 10:03 PM