Are We Out of the Woods Yet?

We learned today that the economy contracted far more than expected--6.1% on annualized basis versus and expected 4.6%-- in the first quarter of 2009. While some observers find this continued plunge troubling, others like Jim Hamilton and Calculated Risk find some comfort that the underlying numbers are moving in a manner consistent with the economy reaching a bottom. Specifically, they note that historically consumption starts to recover in the later part of the recession even as nonresidential investment is falling--something that happened this past quarter. I hope their assessment is correct.

There are, however, reasons to be cautious. First, it may be asking too much to use past U.S. historical patterns to infer what is happening today with the U.S. economy. This is because the current recession, unlike many of the past ones, is truly global in nature and is far more pronounced than any other post-World War II global recession. Given that there are still many problems with the global economy--banking problems in Western Europe, collapse of global trade, large output gap in global economy, China's discomfort with holding dollar reserves--it would not take much (say a swine-flu pandemic?) to cause further declines in the world economy and , in turn, the U.S. economy. Second, there is still the big bank insolvency problem lurking in the United States. As discussed here and in many other places, the U.S. government has yet to forcefully address this problem. (Though David Leonhardt indicates today there may be progress on this front.) It needs to be done, but at the same restructuring large parts of the banking system--that is making bank creditors take a hit--could create another severe credit crunch. Finally, there is always the chance of a deflationary spiral taking hold in the United States as U.S. domestic demand continues to collapse as seen in this figure (Click on figure to enlarge): 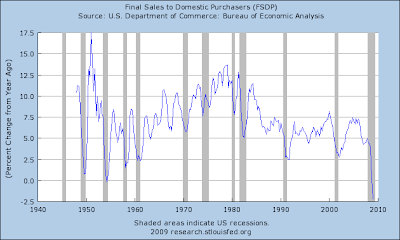 More declines in nominal spending like this is a sure way to let loose deflationary expectations. Although we are not there yet, Rebecca Wilder notes that in many places nominal wages are headed down. Again, I hope this past quarter was indeed the bottom, but until we know for sure Ben Bernanke needs to keep his helicopter running around the clock.
Posted by David Beckworth at 3:58 PM