How Bad Is It Out There?

Going beyond the headline numbers, two recent articles shed some light on the severity of the current recession. First, the New York Times reports the following:

As the recession grinds on, more and more of the nation’s means of production — its workers, its factories, its retail outlets, its freight lines, its bank lending, even its new inventions — are being mothballed.

This idled capacity, like baseball players after a winter off, takes time to bring back into robust use. So even if the recession miraculously ended tomorrow, economists estimate that at least three years would pass before full employment returned and output rose enough for the economy to operate at full throttle. [emphasis added]

Next, Barry Eichengreen and Kevin H. O'Rouke look at the global economy and conclude that current recession to date is actually as bad or worse than the early part of the Great Depression:

The Great Depression was a global phenomenon. Even if it originated, in some sense, in the US, it was transmitted internationally by trade flows, capital flows and commodity prices...

Our Great Recession is every bit as global, earlier hopes for decoupling in Asia and Europe notwithstanding. Increasingly there is awareness that events have taken an even uglier turn outside the US, with even larger falls in manufacturing production, exports and equity prices.

To sum up, globally we are tracking or doing even worse than the Great Depression, whether the metric is industrial production, exports or equity valuations... The “Great Recession” label may turn out to be too optimistic. This is a Depression-sized event.

Here are the key figures from their article (click on figures to enlarge): 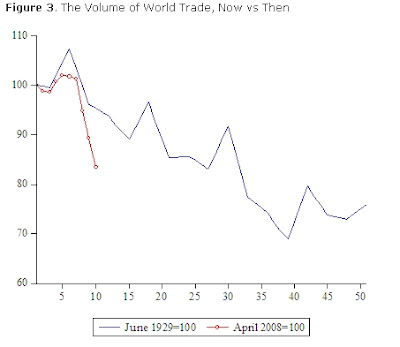 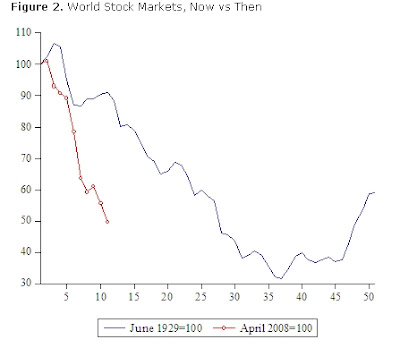 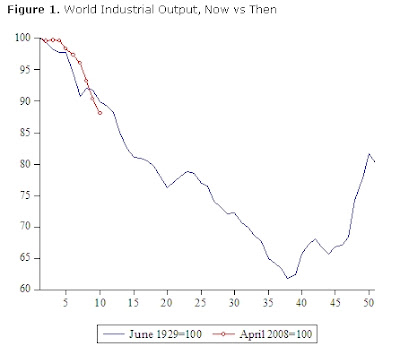 The authors, however, note that economic policies today are far more proactive in tackling this crisis than in the 1930s. The only question is whether the new policies will mater. I hope they do or we may have to wait a while before we can begin our 3-year journey to full employment.
Posted by David Beckworth at 3:26 PM