Take a look at this figure from the OECD's September 2009 Economic Outlook. It shows the policy rates for the three biggest central banks in the world since 2000. I find it interesting that the ECB and the BoJ appear to follow the Fed's policy rate moves. (Click on figure to enlarge.) 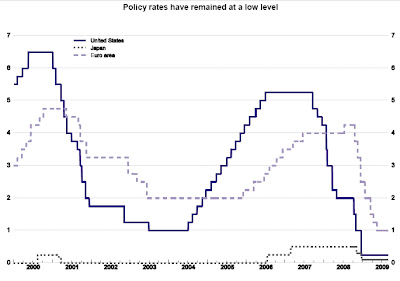 This figure is consistent with the view that the Federal Reserve is a monetary superpower. As I noted before on this issue:

Put differently, the Fed's monetary superpower status meant it was able to stimulate global nominal spending in the early-t0-mid 2000s. Given there exist nominal rigidities in the global economy, this development meant the Fed temporarily pushed the global economy beyond its natural rate level.
Posted by David Beckworth at 8:28 AM