Was monetary policy actually tight in the latter half of 2008? Scott Sumner has been arguing for some time that the answer is yes and has nicely summarized his views in this Vox Eu article. He gives a list of indicators to make his case, but leaves out what I think is the most damning evidence: the dramatic collapse in nominal spending at this time. A key premise behind his thinking is that monetary policy should stabilize nominal spending in order to ensure macroeconomic stability. Consequently, to the extent nominal spending dramatically decreases (increases) it must be the case that monetary policy is too tight (too loose). Below is a figure that documents this collapse in nominal spending--as measured by the annual growth in final sales to domestic purchasers--in the second half of 2008. The figure also documents some other well-known macroeconomic periods. I have taken the liberty to rename these periods using nominal spending labels (Click on the figure to enlarge.) 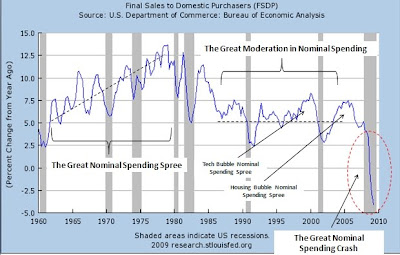 Posted by David Beckworth at 8:57 AM