About That 'Long Depression' of the 1870s

Over at Angry Bear, Spencer asks a question:


[W]hat about the recent argument by Bryan Caplan... that the decade of 1870's was the peak for Libertarian freedom and economics[?] Maybe, but I wonder if he is even aware that economic historians label the 1870's as the "Long Depression". I find it really amusing that he so proud of what others call a depression.

I cannot speak to the historical peak of the libertarian movement, but I do want to address the claim that "economic historians label the 1870's as the Long Depression." That may have been the case in the past, but recent scholarship completely refutes this notion. According to a number of studies there simply is no evidence for a prolonged recession in the 1870s. I have covered this issue before and have the reposted that discussion below. Before turning to this discussion let me point out that Joseph H. Davis in his Journal of Economic History paper notes that the cycle dates set by the NBER in 19th century, which do show a prolonged recession in the 1870s, are flawed because they relied heavily on (1) qualitative information which tended to notice downturns more than upturns and on (2) nominal measures rather than real ones. Therefore, the NBER cycle dates for the 19th century are not reliable. Now here is my previous discussion:


About that Great Recession of 1873...it did not last until 1879 and it is not the longest U.S. economic contraction on record. One would not know this, though, by looking at the NBER's business cycle dates. These dates show this economic downturn lasted a record 65 months from October 1873 through May 1879. Therefore, it is understandable why observers like Paul Krugman, Matthew Yglesias, and Robert Shiller continue to invoke this period in their discussions of the current economic crisis. These dates, however, are wrong according to a series of papers published by Joseph H. Davis ( 2004, 2006 ). Using a new and more robust measure of industrial production for the Postbellum period, Davis shows most of the NBER recessions during this time are overstated. In the case of the 1873 downturn it only lasted 2 years. The popular Balke and Gordon (1989) real GNP series for this period similarly shows only a 2-year recession following the 1873 economic downturn while the famous Romer (1989) real GNP series shows no recession at all during this time. Unfortunately, the NBER has not revised these dates and, as a result, it continues to add confusion.

The figure below shows the log version of these three series for the Postbellum period. Nowhere in this figure is there 5 year + economic downturn in the 1870s. (Click on figure to enlarge.) 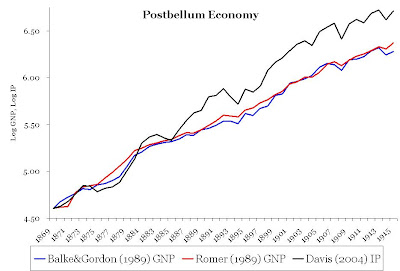 Update: Commentator ECB points us to this interesting NY Times piece on the 1870s.
Posted by David Beckworth at 10:47 AM